Empty
Dharamsala, HP, India, 20 September 2011 - In a letter offering his condolences to the Chief Minister of Sikkim, His Holiness the Dalai Lama expressed his concern for the devastation caused by the recent earthquake in the state.

"I was saddened to learn about the loss of life and damage to property that the recent earthquake has caused across isolated Himalayan regions, particularly in Sikkim. I offer my sympathy and condolences to all those families, who have been directly affected by what I understand is one of the worst earthquakes in recent memory," His Holiness said in his letter dated 20th September 2011.

His Holiness offered his prayers for those affected by this tragic natural calamity and also donated Rs. 500,000 from the Dalai Lama Trust towards relief work in the affected areas of the state. 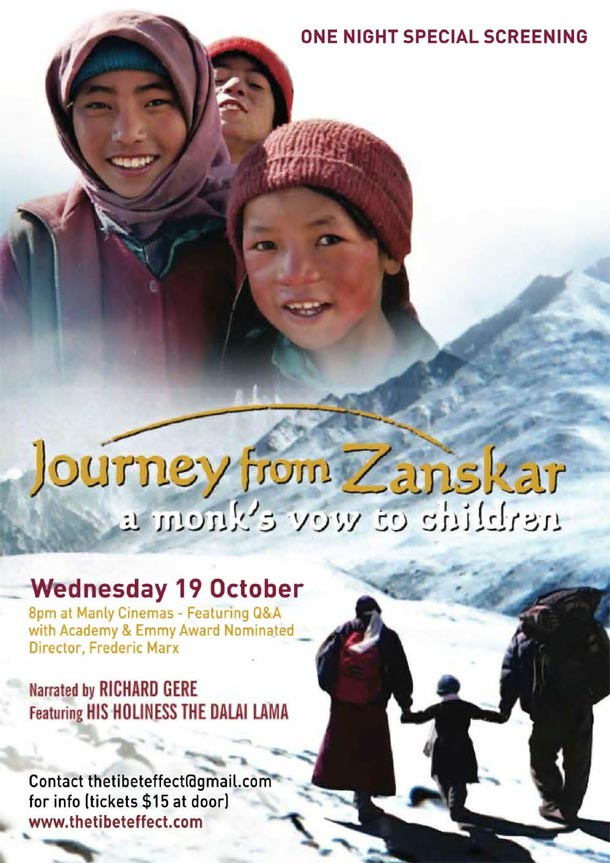 Empty
Melbourne: Sydney will host its first annual Tibetan Film & Arts Festival from the 4th to the 12th of this November, which will be presented by The Tibet Effect, musician Tenzin Choegyal and Students for a Free Tibet (SFT) Australia.

Empty
Dharamshala: An Obama administration official has said that the United States Agency for International Development's (USAID) India Mission will give $2 million to Tibetan settlements abroad.

According to the Economic Times, Undersecretary of State for Democracy and Global Affairs Mario Otero has said that the money will be part of a two-year program to support Tibetan settlements in India, Nepal, and Bhutan.

Organic agriculture and vocational training will be part of this new program, which, according to Otero, will "encourage youth to remain in the settlements, strengthen community ties, and preserve cultural and linguistic traditions."

A spokesperson for the Obama Administration said that the US will continue its longtime support for NGO's that work with Tibetans both inside and outside of Tibet. The State Department and USAID support cultural preservation, sustainable development and environmental preservation among Tibetan communities.

Empty
Montréal, Friday, 8 July 2011: - The Canada Tibet Committee is calling upon the Conservative Party of Canada to retract the congratulatory letter that the party sent to the Communist Party of China (CPC) on its 90th anniversary.

The letter's existence first reported first by Chinese news agencies congratulates the communists on their anniversary and notes that the Conservative party "look(s) forward to future relations between the two parties."

``Wittingly or not someone at the Conservative party fell into a trap that only serves the propaganda interests of one of the most repressive regimes in the world and the right thing to do is to eat the flattering, backslapping words and do so publicly,`` said CTC executive director Dermod Travis.

``The Conservative party under former leaders would have shuddered at the thought of sending a similar letter to the National party of South Africa while that regime practiced its repressive policies of apartheid and someone at today`s Conservative HQ should be wise enough to appreciate that the CPC regime - which only maintains power through military oppression - doesn`t deserve congratulations, but rebuke.``

The CTC urges the Harper government to send a note to its political wing to cease interfering in Canadian foreign policy to avoid such misguided missives in the future.

The Canada Tibet Committee is an independent non-governmental organization of Tibetans and non-Tibetans living in Canada, who are concerned about the continuing human rights violations and lack of democratic freedom in Tibet.

Empty
Dharamshala- The Tibetan exile community of Mc Leod Ganj has witnessed changes on an unimaginable scale since His Holiness the Dalai Lama's first arrival on 30th April 1960. It has moved from being an abandoned, remote British hill station, to a highly developed tourism juggernaut; a sanctuary for Tibetan-exiles, and the locus of co-coordinating the Tibetan struggle. The town has been changing at a breakneck speed.