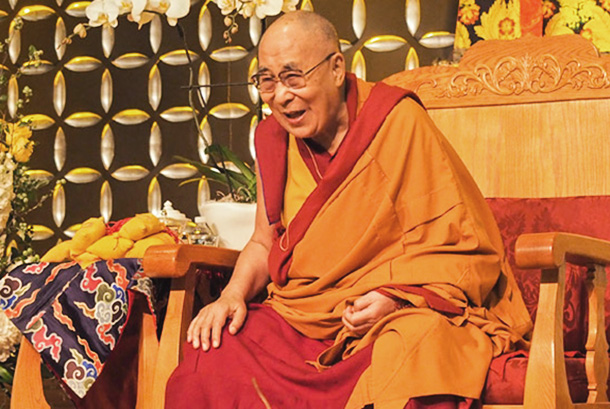 Boston, US — While explaining Tibet was historically a free and independent country in past centuries, His Holiness the Dalai Lama said that the people of Tibet want genuine autonomy while remaining within the PRC so they can continue to keep their unique culture, language and traditions alive.

The event began with a representative delivering a citation from the Governor of Massachusetts, another presenting a gift from the Mayor of Boston and the President of the Boston Tibetan Association making his report.

"I'm here to meet Richie Davidson, so the opportunity arose also to meet all of you. Like Tibetans everywhere, you are keeping the spirit of Tibet alive. We've been in exile 58 years. In India we have the CTA. Major monasteries have been re-established and are thriving. Tibetans in exile are scattered all over the world, but wherever we are we form local communities, as you have done here, to preserve our identity and traditions," the spiritual leader of Tibet said while delivering his speech.

"Those who live in free countries outside Tibet have a responsibility to keep up our spirits to encourage our brothers and sisters in Tibet who remain impressively determined," His Holiness told a crowd of roughly 2,000 Tibetans gathered to hear him speak in Boston, MA, USA on June 25, 2017.

"Historically Tibet was a free and independent country in the 7th, 8th and 9th centuries, after which it fragmented. What has since held us together is our common religion, culture and language. Today, it's very important that Tibetans of the Three Provinces remain united. While remaining within the PRC we want genuine autonomy so we can continue to keep our culture, language and traditions alive."

His Holiness recalled that in 1959 nobody knew what would happen to Tibetans who had become refugees. The priority was finding ways to survive and the Government of India were generous with their help.

"There was a time when Tibetan Buddhism was dismissed as Lamaism as if it was not a proper Buddhist tradition," His Holiness remarked. "Since we came into exile we have been able to show that it is in fact a pure and complete form of Buddhism. The tradition handed down to us from Nalanda includes profound philosophy and logic, as well as a rich understanding of the workings of the mind and emotions. We have kept this alive for more than 1000 years and now are in a position to draw from it to make a positive contribution to the well-being of humanity.

"Lately in India I've been urging people to study, to develop a sound understanding not content to rely only on faith. In monasteries and nunneries from Ladakh to Arunachal Pradesh efforts are being made to study. It's on this basis that Buddhism will last for centuries to come. China was historically a Buddhist country following the Nalanda tradition as we do. What the Chinese lacked was the command of logic and epistemology that we have maintained and a corresponding path of rigorous study.

"In 7th century, Thönmi Sambhota devised a Tibetan script or improved on what already existed taking the Indian alphabet as a model. In 8th century, Trisong Detsen turned not to China, but to India to invite Shantarakshita to Tibet. Right from the start, he, and following him, his student Kamalashila, established the importance of employing logic and reason. It's because of this that over the last more than 30 years we have been able to hold fruitful conversations with modern scientists. Scepticism about the mind's being any more than a function of the brain has given way to an acknowledgment of neuroplasticity, recognition that developing the mind can change the brain.

"We have a responsibility to uphold this Nalanda tradition that has been handed down to us, not out of attachment, but because it provides us an opportunity to be of service to others. Ensuring that the younger generation have a command of Tibetan ensures that they too have access to it."

After that he gave the transmission of the mantras of the Buddha, Avalokiteshvara, Manjushri, Arya Tara, Hayagriva and so forth and encouraged those gathered to make their lives meaningful.

His Holiness mentioned that in 2015 his physicians found indications of prostate cancer and decided to give him focused radiation treatment instead of surgery last year. This year his recent check-up at the Mayo Clinic has revealed all traces have gone. His Holiness declared that he's physically healthy, mentally sharp and sleeps well.

After lunch His Holiness joined his old friend and Professor of Psychology and Psychiatry, Richie Davidson and business leaders discussing human well-being. He told them that it's basic human nature to be warm-hearted because our lives depend on having a sense of care for others. But the pressing reason for exploring well-being today is that we find ourselves facing problems that are prompted by anger, self-centredness and intolerance.

"We are all endowed with a biological seed of compassion, but we have to nurture it with intelligence. If we don't change direction, this century will end up like the one that went before overwhelmed by intimidation, violence and bloodshed. Nobody wants that.

"If something is worth doing, do it. If, in fact, you fail, there'll be no cause for regret. You can try again. To die without even having tried, will be to die disappointed. We all have opportunities to contribute to making a better world; we must seize them with far-sighted vision. I'm encouraged that so many people are becoming interested in the well-being of humanity. This is surely a sign of hope."

Early Monday morning His Holiness will fly from Boston to Frankfurt; the first leg of his journey back to India.