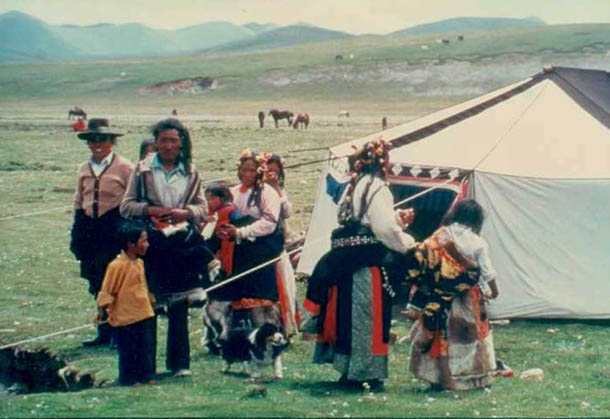 Dharamshala: Impulsed by the so called Grassland Law adopted in 1985, and then completed by a series of programs and various guidelines such as the "Tuimu Huancao" ("removing animals to grow grass") and the "Tuigeng Huanlin" ("returning Farmland to Forest") policies, the resettlement of millions of nomads in Tibet is not yet to end. According to the so called regional government, another 185 000 families are expected to move into new homes by 2013.

Around 300 000 families in Tibet, involving 1.43 million nomads and farmers were moved into new or fixed settlement homes since 2006. Quoted by the Annual Report 2010 published by the Tibetan Centre for Human Rights and Democracy (TCHRD) this month, this vast initiative led by the Chinese government has been criticized by a bunch of associations as a threat to the Tibetan nomadic culture.

Also known as the Western Development Strategy, those programs are presented by Chinese as a way to respond to the degradation of pasture lands and to control disasters in the low lands of the country. If the UN Special Rapporteur on the Right to Food, Olivier De Schutter, notes that there is little doubt about the damages, he however pointed out the limits of this very process in a recent report. Highlighted as a "vulnerable group" in the document, Tibetan nomads have no other option than to sell their herds and resettle.

The association Free Tibet explains on its website that the "livestock are seized, and often slaughtered. Compensation is often small and nomads' attempts to complain against the arbitrary measures are ignored by the local authorities". Tibetan nomads are said to have complained that after one year of payment following their settlement, most of them have remained without any means, or government aid, to sustain themselves.
For the newly settled nomads, their "lack of education and skills to find employment in Tibet's increasingly urban economy" often leave them in a situation of poverty.

Beside the practical issues and the number of critical consequences of the resettlement process, associations also point out motivations that are not only environmental. Nicholas Bequelin, a China researcher for Human Rights Watch, and author of a report concerning the topic, said Chinese spent hundreds of millions of dollars on resettling Tibetan nomads, partly to better control them. "The baseline, of course, is that China has a problem with the Tibetan population, Bequelin said. "They fear that their political loyalties are not with the Chinese state, and that they stand in the way of exploiting the natural riches of these areas, natural riches that are needed to fuel China's economic development."

In his recent rapport, UN Special Rapporteur, De Schutter, underlined the contradictions of Chinese attitude, as they ratified the International Covenant on Economic, Social and Cultural Rights that prohibits depriving any people from its means of subsistence, and the 1992 Convention on Biodiversity which acknowledges the importance of indigenous communities as guarantors and protectors of biodiversity (Art. 8 j).