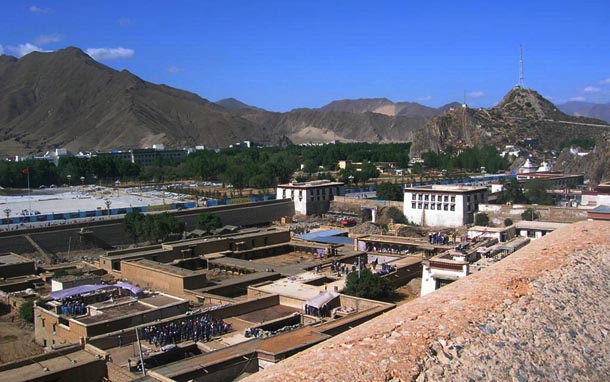 Jampa Pelsang alias Puloe, a monk of Gaden Monastery, died recently after he was released from 15 years in prison

Dharamshala: - Jampa succumbed to grievous injuries that he sustained during severe torture and inhuman treatment in Drapchi and Chushul prison after he was sentenced to 15 years in 1996. He was first arrested at the height of a crackdown as a prelude to severe imposition of patriotic re-education on the three main monasteries - Sera, Gaden and Drepung - in 1996.

On 6 May 1996, the religious affairs department of Tibet Autonomous Region sent an additional work team to Gaden Monastery and told the monastery that the Central government had orders to stop the ongoing religious debate of the monks.

The work team forced patriotic re-education on the monks, which involved coercing the monks to remove His Holiness the Dalai Lama's portrait from the monastery.

However the whole work team had to abandon its work and leave the monastery after the monks defied its order with spontaneous protest.

This prompted the Chinese government to deploy military forces at the monastery and used force to arrest monks. In the crackdown, two monks, Dorjee and Gelek Jinpa, were shot. Many monks were arrested and removed from the monastery in the repression from 6 - 7 May 1996.

Jampa Pelsang was among those monks who were arrested for allegedly leading the protest. He was sentenced to 15 years in jail, while many others received varying prison terms.

He was sent to Drapchi and Chushul prison, where the Chinese authorities severely tortured him to the brink of death.

Even though Jampa was finally released on 6 May this year, he died 17 days later after every possible medication failed to recover him.

He was born in Drigung Lungshoe in Meldro Gungkar and started monastic education at an early age in Gaden Monastery.

Like Jampa, another monk of Gaden Monastery named Tenzin Yeshi, who was arrested during the patriotic education in 1996, also died after release from the prison.

Lobsang Wangchuk, who was sentenced to 10 years in Drapchi prison, where he protested against the authorities, who later shot him dead.