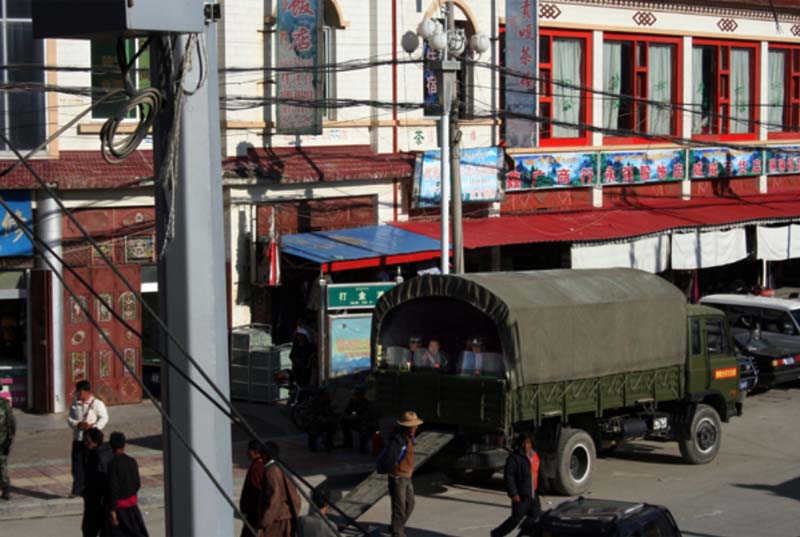 Dharamshala: A briefing paper of the protests in Karze Region, Eastern Tibet (Karze Tibet Autonomous Prefecture) has been released by Tibet.net. The briefing is in regard to the peaceful protests started by Tibetans on June 6, and details abuses by the Chinese government toward the protesters in the region.

Since June 6, Tibetans in Karze Region have been protesting for the "return of His Holiness the Dalai Lama to Tibet," "Freedom for Tibet" and "Human Rights in Tibet."

In response to these protests, the Chinese government has sent in a large number of troops to suppress the protesters. According to the Central Tibetan Administration (CTA), 39 Tibetans have been arrested in Karze.

The briefing breaks down the abuses in Karze into five main categories: Military Buildup, Freedom of Speech and Expression, Restriction over Freedom of Movement, Arbitrary Arrest, and Brutal Treatment of Tibetans.

The first section, Military Buildup, states that the military personnel in the region has doubled since the protests started on June 6. There are military checkpoints all over the region, and the situation there is extremely tense.

The report goes on to detail the restrictions on freedom of speech in the region. While the Chinese constitution promises freedom of speech and expression, this has not been the reality for Tibetans in the Karze region. Many Tibetans have been arrested in Karze for speaking their opinions during the protests.

Freedom of movement has also been restricted by the Chinese government. If monks and nuns do not have identity cards when they go outside the monastery, they can be arrested. The report cites an example of nuns being arrested on their way to work at a clinic. Further, if Tibetans have to go to the hospital they are required to seek permission from the authorities and have a government official go with them.

According to savetibet.org, pedestrians are stopped by police and made to show household registration, identity cards, a document from the local government granting permission to travel, where they were born, and where they are staying.

The last point the report makes is that Tibetans have been treated brutally by the Chinese police, who have beat them repeatedly, sometimes with iron batons, forcing them into police trucks.

Tibet.net concludes with the following statement: "It is clear that the human rights situation inside Tibet, particularly in Karze region, is deteriorating amidst a dramatic increase of Chinese repression and brutality. With the kind of repressive measures that are imposed by the Chinese authorities, there is a possibility of more protests at any time and hence arrest of many Tibetans in the Karze region."

According to savetibet.org, the incidents of peaceful protest in Karze, "carried out with the knowledge that violent reprisals and imprisonment are certain on detention, indicate the strength of Tibetans' determination to express themselves and protect their cultural and religious identity despite the dangers of doing so."