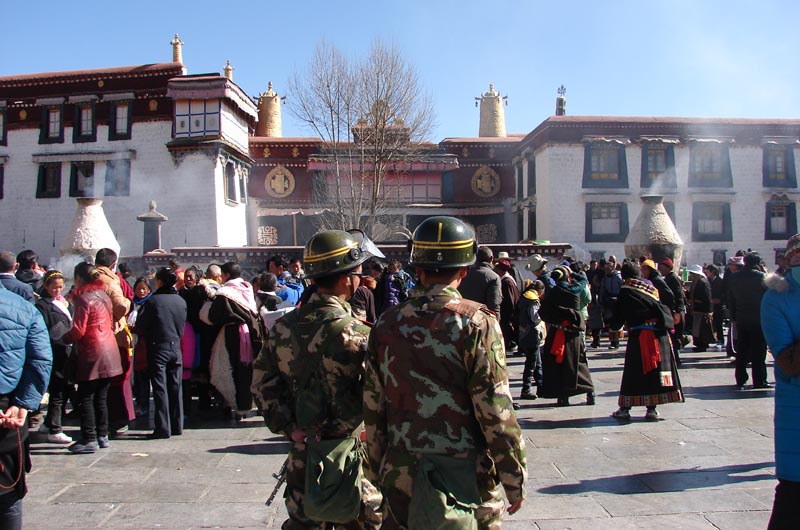 Dharamshala: An official of the communist regime has claimed that China is planning to spend 300 billion yuan ($47 billion) for development of the so called Tibet Autonomous Region between 2011 and 2015, with 90.5 billion yuan to finance roads, railways, hydropower stations and other infrastructure.

The 226 projects the money will support are "aimed at achieving rapid development in Tibet", the Chinese state controlled media Xinhua news agency quoted deputy governor Hao Peng as saying at an internal meeting on Wednesday.

The projects will cover infrastructure construction, environmental protection, housing, health care, social security, vocational training and other areas concerning the livelihood of the Tibetans, he said.

"By the end of 2015, a total of 193 billion yuan will have been spent on these projects," he was quoted by official Xinhua news agency as saying. Nearly half of the investment, or $ 90.5 billion will be spent on key infrastructure projects, including a railway linking Tibet's capital city of Lhasa with its second largest city Xigaze.

Other projects will include new highways linking Tibet with China's interior regions and the construction of the Zangmu Hydropower Station, said Hao. About 33 per cent of the investment will be used to accelerate social and economic growth in Tibet's rural areas by building new roads, homes and irrigation systems, as well as providing tap water, electricity and gas to rural homes.

The investment will also be used to provide adequate health care and social welfare services for rural residents. About eight per cent of the investment will be used to foster the development of indigenous industries, including tourism, mining, agriculture and stock-breeding.

Five per cent of the investment will go to environmental protection, including the protection of wetland and pastures, soil erosion reduction programs and urban sewage treatment, he said. During the 2006-2010 period, the central government had invested 137.8 billion yuan to build 188 key infrastructure projects in Tibet.

Last year, the Chinese government pledged to foster "leapfrog development" and "lasting peace and stability" in Tibet. By 2020, the per capita net income of rural Tibetans should be close to the national average level, according to a plan for Tibet's social and economic development announced early last year, the report said.

Similar projects have been unveiled for neighboring Eastern Turkestan and Inner Mongolia, whose people have likewise chafed at Chinese rule. China has gained a great benefits from Tibet's economy, sped by the completion of a railway from China to Capital Lhasa of Tibet and large mining projects in the region, though much of Tibet still remote and very poor under name Chinese economy development in last 60 years.

However, political and economic analysts say that those projects have also brought thousands of Chinese migrants to Tibet, leading to many Tibetans' perceptions that they have been left out of economic growth.

Since 2008 bloody crackdowns in all parts of Tibet, China claimed that the government has boosted training programmes, subsidies and investment there in an implicit recognition of the economic roots to the violence.

Despite international criticism, China has ruled Tibet with an iron fist since Communist troops occupied the Himalayan region in 1950s. China is facing world-wide criticism for failing to respect Tibet's unique religion and culture. Tibetans say China is suppressing people in Tibet and aiming at wiping out Tibetan identity under the tool of economy development.

The invasion of Tibet began in 1949. Chinese occupation has resulted in the deaths of over 1.2 million Tibetans, the destruction of over 6,000 monasteries, nunneries and temples, and the imprisonment and torture of thousands of Tibetans.