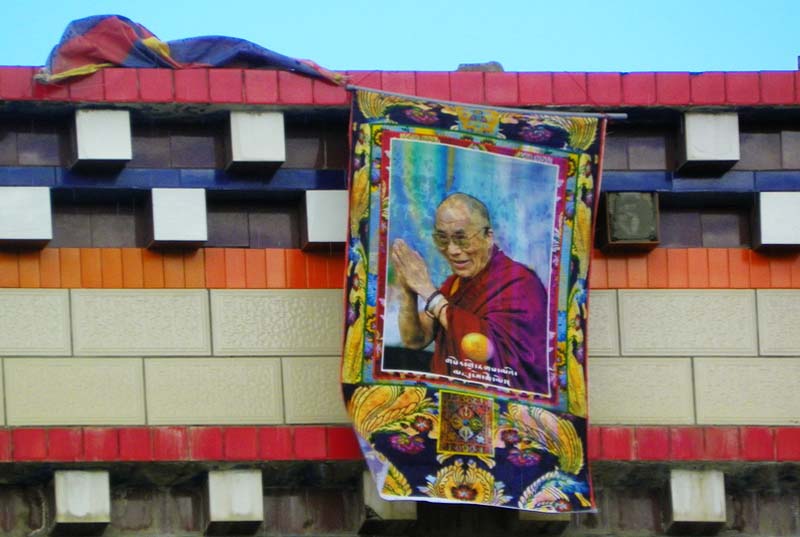 Dharamshala: - A Peaceful protest occurred in Sertha county, eastern Tibet on Saturday, 1st of October. During the weekend, a large Tibetan flag and a photograph of His Holiness the Dalai Lama were raised onto a four story building in the town, by Tibetans demanding freedom from China. Protesters urged to stand up for freedom and Human Rights in the Himalayan region.

"Over 200 Tibetans, including monks and laymen, held peaceful protest in front of the main entrance of Serta county in eastern Tibet Saturday at around 12:30 pm (local time) according to Tibet source.

The protesters, who were reported to be Lay Tibetans, rallied toward the street in Serta town, shouted and said long life Hiss Holiness the Dalai Lama and free Tibet.  Many pamphlets were distributed in the street that contained slogans such as religious freedom in Tibet, freedom to use Tibetan Language, freedom of Human Rights, freedom of expression and the return of His Holiness the Dalai Lama etc.

The protest from Serta county (Chinese: Seda) comes amid a year of uprisings from Tibet, and tensions are running particularly high since the recent self-immolation of two monks from Kirti monastery, which occurred just last week.

Several other Tibetans in eastern Tibet, including many monks, have been detained by the Chinese authorities in recent months and are said to be being brutally tortured despite being held without charge. The incident on Saturday began at mid-day, when someone hung a huge Tibetan national flag, and a large protrait of His Holiness the Dalai Lama, from a four story building in Serta town.

Later in the day, both the flag and image of His Holiness were taken down and thrown in the street. This triggered a wave of protest from a group of Tibetans. Protesters shouted such as let fight for rights of culture and identity and said "wake-up, people in Tibet", we don't have the fundamental rights and equal in dignity. crowd demonstrated for about 15-20 minutes."

More than 30 Chinese police arrived to control the situation and they attempted to detain peaceful protesters. As time passed, the crowd grew larger, eventually exceeding in all directions. Authorities could not detain the earlier protesters.

In last month, another Buddhist monk from Kirti Monastery has reportedly died and one more remains in a critical condition after setting themselves on fire in Ngaba county, marking at least the third self-immolation in protest against Chinese rule in Tibet and the harsh treatment of the Tibetan people. Over the past two months, the Chinese court in Ngaba county has sentenced several monks from Kirti Monastery to lengthy prison terms after the authorities accused them of involvement in late Phuntsok's self-immolation to death.