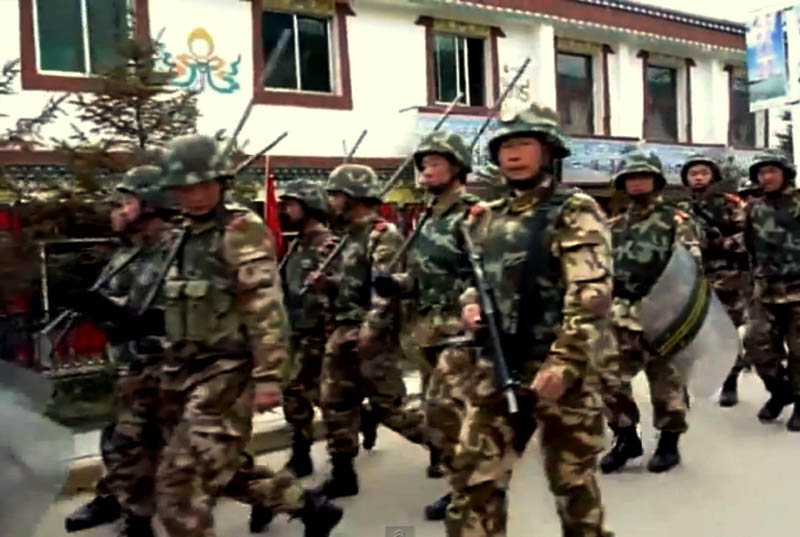 Dharamshala, India: - According to Chinese state control news reports, China announced its plans to give Tibetan monks welfare benefits in an attempt to improve "stability" at a convention of the Tibetan branch of the Chinese Communist Party.

Tibetans monks will apparently be granted pensions, medical insurance and living allowances from the Chinese government in Tibet.

The announcement made by Communist Party Chief in Tibet, Chen Quanguo, Monday, 14th November comes after a flood of self-immolations all over the severely oppressed Ngaba and Karze counties of Eastern Tibet- acts that haved divulged the discontent of peace-loving Tibetans to the world.

It is claimed that "the government will take great pains to ensure that public services such as electricity, water, telecommunications, radio and TV stations are provided to the local monasteries," Quanguo was quoted as saying by the Global Times newspaper. He added that there would also be personal help, including allowances, for monks and nuns living in Eastern Tibet.

Reports claim that maintaining stability is the primary motive of the plan, which could help nearly 50,000 people, especially monks and nuns who previously had to depend on public donations from monasteries to fund their daily expenses.

According to Chinese officials, the plan will also ensure that more information is disseminated through books, magazines and TV, published in the Tibetan language.

Xinhua, China's state-run news agency has claimed that a compensation scheme is in the works, to help preserve wildlife by reimbursing herders for livestock eaten by wolves, thus preventing the wild animals from getting killed.

Lobsang Sangay, the newly-elected Prime Minister of Tibet's government-in-exile, recently told the the Washington Post: "It is clear that the root of the self-immolations is the continuing occupation of Tibet."

Protests and demonstrations have sprouted up all over the globe in support of Tibet.

The international community has awakened towards the injustices being committed under Chinese rule in Eastern Tibet, further attested by the desperate actions of its native monks.
Recently, at the APEC in Honolulu, US Secretary of State severely criticized Beijing's policies towards Tibet, urging them to immediately make amends.

The announcement of the Chinese Communist Party Chief comes at an opportune time; now more than ever, China is confronted with the urgency to repair its image in the world-view.
In the meanwhile, Chinese officials continue to throw accusations at Tibet's spiritual leader, His Holiness the Dalai Lama. Over the weekend, Chen Quanguo was reported to have said, "His plot of Tibet independence and separatism has never changed".

According to the international media. China also announced that "one or two special agents" will be sent by the local government even to temples with less than 20 monks.

Since 1989, China has launched several water diversion projects in Tibet, the world's largest water reservoir and the origin of Asia's 10 major river systems. In November 2010, they started construction work to divert the Tsangpo, along with the Sutlej. There are reports that China's state-owned electric power companies signed contracts to develop hydro-power on the rivers in Tibet.

It has been reported that there is a two-pronged motive behind these water projects: internal economic compulsions and the desire to acquire external dominance.

So far, China has avoided signing any bilateral treaty to do with the utilisation of water resources and has been barraged by 263 NGOs in opposition to its dams and diversion projects on the Mekong river. These NGOs believe that China is using water resources in Tibet as a political tool, moreover- the delicate ecology of Tibet, Nepal and India would suffer greatly from such invasive industrialization of the water sources.

Nevertheless, China continues to ply occupied Tibet with its insidious strategems in an effort to gain political, economic and cultural dominion under the guise of so called "stability for Tibet".