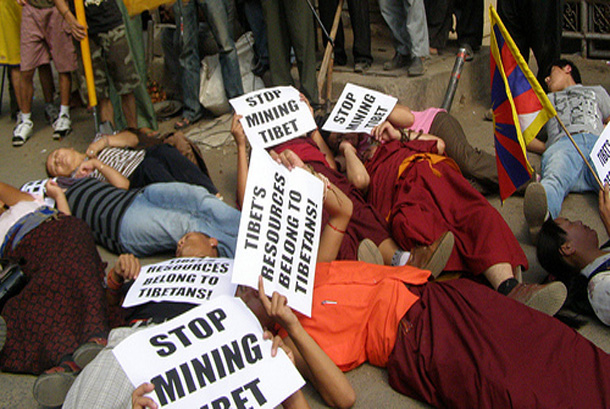 On 10 August, 2012, Chinese gold miners arrived at a valley located next to the mountain in Tsangkor Village of Gade County and proceeded to set up their camp in the area. Simultaneously, local officials held a meeting to warn the Tibetans inhabiting the areas to not interfere with the mining project, stating that it is a government project. However two days following the meeting, the miners' tents were burn down mysteriously during the night. Fortunately, the miners have received an anonymous tip about the fire before the tents were lit and managed to escape.

Four days after the tents incident, the Vice Chief of Gade County and the head of mining organization came to the village and once again urged the locals to support the miners and warned them to not interfere with the mining. Nevertheless, the villagers continued to guard the mountain, insisting that the sacred mountain is the deity of the village, their dharma protector, as well as the god of livestock. Therefore disturbing the mountain is disrespectful to the gods, and thus, "even one handful of soil" cannot be extracted.