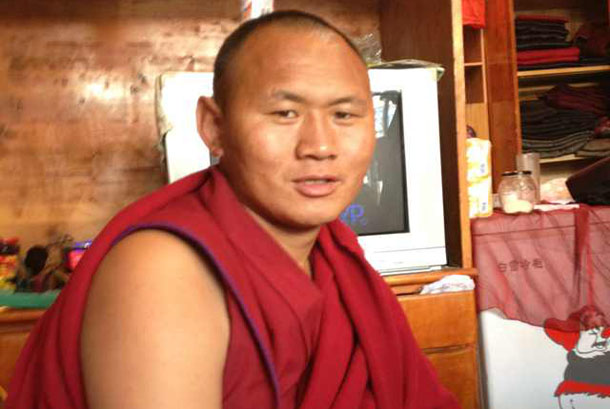 Dharamshala: On 3rd Sept, 2007, the Chinese government held a re-education movement in Lithang County, titled: ‘Love Country, Love Religion” – try to re-educate Tibetan people and inform them about the Government. At the same time, they had a six-point document that all the villagers had to sign.

During that time, Jamyang Tenzin; a Monk of Yonru Geyden Rabgaylhing Monastery in Lithang County, (Kham) told officials that the Chinese government’s words about giving money to the poor and helping Tibetan people are just propaganda. He stated that in reality, local Tibetans are getting absolutely nothing from the government and that it was all just for show. He said, if Tibetan people cannot wear a Dalai Lama picture, or have His photograph in their house, where is the religious freedom? He also stated that on 1 August, 2007, one Tibetan nomad named Ronggye Adak was arrested by Chinese police for protesting and Jamyang Tenzin demanded a reason for his arrest. Thereafter, he was arrested by Chinese officials and was in prison for 3 years.

During his detainment, he endured torture and was diagnosed with kidney damage after his release. He came out of prison mentally unstable. After he was released, he received Tibetan medicine in Amdo from highly regarded Tibetan doctors, and took it 3 months for his condition to improve. When he returned home, he organized many prayer meetings in the village and engaged in other altruistic acts for the Tibetan people.

On 28 August, 2012, there was a prayer meeting in Lithang Monastery and he attended the meeting. During his presence at the meeting, Chinese officials came to his house and it without his consent. Thereafter, Jamyang Tenzin disappeared mysteriously so the villagers went to the county officials to ask them about his whereabouts. Officials responded that he was arrested. In turn local monks demanded a reason for his arrest – officials responded that was unnecessary and that they had no time to explain his arrest at the time.

It is currently unclear as to Jamyang Tenzin’s whereabouts or of his condition.

Tenzin is 30 yrs old, from Sakor Village, Lithang County, Kham Region. His father is Thingly Tsering, his mother, Tashi Dolma. Before the 2007 arrest, he studied in Gaden Monastery in South India. Later, in Tibet on his return from India, he was arrested and transferred to seven different prisons.