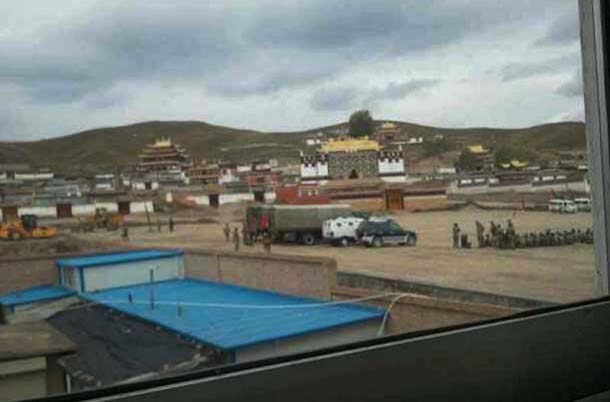 Dharamshala: - Chinese authorities have arrested four Tibetan monks of the 'Dhokar Monastery' in Tsoe county, north-eastern Tibet on charges of allegedly involving self-immolation in protest against Chinese rule over Tibet. And several monks from 'Tsoe Monastery' also arrested under suspicion of taking photographs of another self-immolation, sources inside Tibet have said.

According to sources from inside Tibet, "Sangye Gyatso, 27, was from Tsoe City (Ch: Hezuo), Kanlho (Ch: Gannan Tibetan Autonomous Prefecture), in the traditional province of Amdho, North-Eastern Tibet. He passed away at the site of his protest following which monks and local Tibetans carried his body inside the Monastery premises."

"Three of the four monks; Jigme Gyatso, Kalsang Gyatso, and Kunchok Gyatso were arrested on October 17, 2012 by the Chinese police during a raid at the Monastery, eleven days after Sangye Gyatso setting himself on fire. However, Tashi was arrested a few days earlier, " said reports.

"Chinese officials offering bribe to family members of Sangye Gyatso, asking them to sign a document stating that his self-immolation protest was not targeted against China's rule over Tibet. The situation became very tense in the areas," the Tibetan writer stated, citing sources in the region.

A highly respected Buddhist master, Tamdrin Dorjee, (52) passed away in his self-immolation protest in the same region on October 13. The Tsoe city and surrounding Areas have witnessed several protests against Chinese repressive policies in the past, with mass demonstrations in 2008. "Tamdin Dorjee was also grandfather of the 7th Gunthang Rinpoche, who is one of the most revered religious leaders in north-eastern Tibet's Amdo Province,' he added.

"There are more reports stating that several Tibetan monks from Tsoe monastery also arrested under suspicion of taking photographs of Tamdrin Dorjee's self-immolation protest against China's rule. But, it is still unclear how many monks were arrested," Gedhun added.

"Local Tibetans in the region and monks from both Monasteries were heavily interrogated and severe restrictions have being imposed on their daily movements and activities," he added.