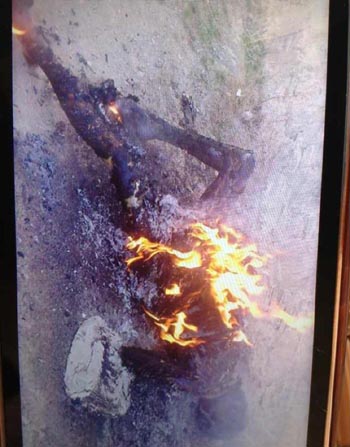 Dharamshala: - A Tibetan layman from Labrang has set himself on fire Monday, 22 October, while shouting slogans calling for the Dalai Lama's return to Tibet, an information received by The Tibet Post International said.

"Within a few minutes, Chinese security forces and police arrived at the scene, doused the still fierce flames, and took him away," according to Tibetan sources in exile in touch with Tibetans in the Sangchu area.

"It was not clear at that point whether he was still alive," said Lhachab Jinpa, an official from exile Tibetan political prisoners' group, Gu-Chu-Sum Movement of Tibet.

"Dhondup set himself on fire at Labrang monastery in Sangchu county, shouting slogans of protest against the Chinese government and the Chinese security forces and police stationed nearby ran toward him and tried to put out the flames," sources said.

Jinpa stated this early morning that he could not immediately find any photo or video of the incident. Dhondup's present condition and whereabouts are not known.

But, In a photograph taken on October. 22, 2012 in the area during the incident, Dhondup lies on the ground, his body still burning and smoking from setting himself on fire and the image received from Tibet just hours after the self-immolations protest occured. The photo show that he is severely injured and may not survive.

Confirming the self-immolation, Dhondup who reportedly died in a hospital, is the latest to self-immolate in a wave of protests against Chinese rule since 2009 and that have now surpassed over fifty seven. Dhondup was married to Dorjee Tso, and leaves behind his only son.