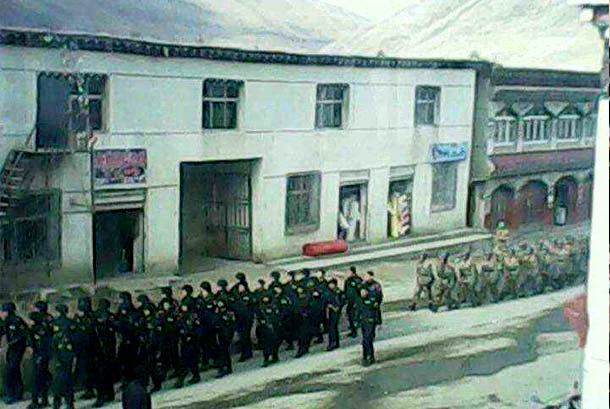 Dharamshala: - The Chinese authorities arrested five more Buddhist monks from Wonpo Monastery in the Sershul Dzachukha county of Eastern Tibet, according to latest information received by The Tibet Post International.

"The latest development information from the area is stating that, five more monks from Kirti Monastery, who were studying at the Wonpo monastery have been arrested by Chinese police, on October 22, 2012, after dozens of armed Chinese police arrived at the monastery," Jampa Yonten, a monk from South India. .

The local authorities had imposed heavy restrictions in the county and arrested at-least 24 Tibetans including 23 monks and 1 layman, after pulling down a Chinese flag at a school in the area, raising the Tibetan national flag and distributing leaflets calling for Tibet's freedom."

"But, the health conditions, whereabouts and details of these monks are unknown," Jampa said. It's difficult-to-reach and to get information from inside the areas, as all communication with local Tibetans have been cut off recently by the authorities. The total of people detained Tibetans, can be more than what we can give.

Jampa said that nine of the eighteen monks who previously arrested have been moved to another location. The Chinese government has sealed-off Wonpo monastery by deploying a large of number of paramilitary forces in and around the monasteries and the surrounding areas.

"The situation there remained tense, as large number of police and paramilitary forces are still deployed to the area since the incident occurred.

"A serious investigation was carried out by the authorities on 19th October to search those who drew the Tibetan national flag and wrote slogans on the leaflets. They investigated the each and every monk by looking at their handwriting," said Jampa.