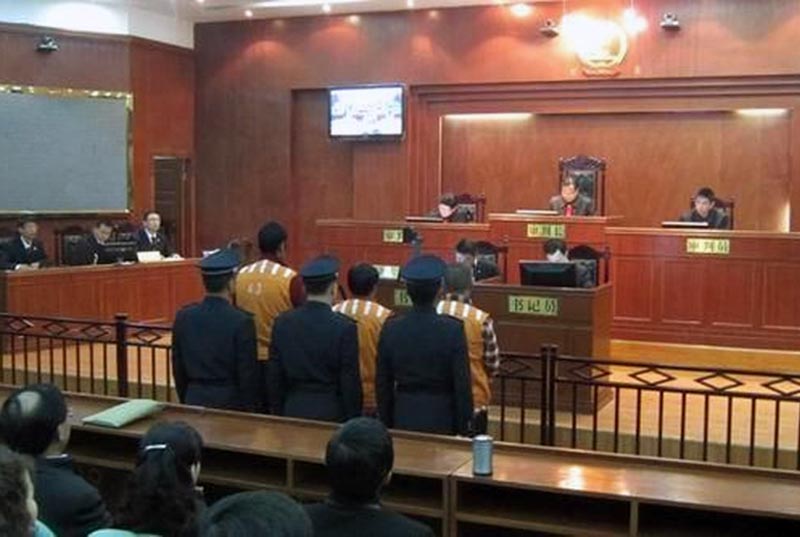 Dharamshala: Three Tibetans have been sentenced in a Chinese court in Amdho region of Tibet to long prison term on charges of "state subversion", after they allegedly "spread text and images" related to Tibetan independence, according to a report by the state controlled media 'People's Daily.'

Dharamshala: Three Tibetans have been sentenced in a Chinese court in Amdho region of Tibet to long prison term on charges of "state subversion", after they allegedly "spread text and images" related to Tibetan independence, according to a report by the state controlled media 'People's Daily.'

On March 18, 2013, the so called Chinese 'Intermediate People's Court' in eastern Tso-ngon in Amdho region of Tibet (Haidong Prefecture in Qinghai Province) sentenced Jigmey Thabkhe to five years in prison, his civil and political rights deprived for three years. Kalsang Dhondup had his rights removed four years and a six year jail term, Lobsang to 4 years, his civil and political rights deprived for two year on charges of "state subversion."

According to Chinese state controlled media the "three Tibetan men have been charges of subversion and "splitting" the country- China and given harsh sentences for allegedly "spread text and images" related to Tibetan independence abroad or oversea organisations.

The Chinese court claimed the three used self-immolation incidents in sending out and distributing texts and photographs related to Tibetan separatist activities and thus, inciting to split the country.

The court invoked article 103 of the Chinese Criminal Law to punish the so-called offenders. The said provision deals with those who "organize, plot or carry out the scheme of splitting the State or undermining unity of the country."

The Chinese authorities have not given more detail about their sentences, including their age and current conditions. Many family members and relatives have reportedly given heavy jail sentences after refusing to blame the self-immolators as family or personal problems.

Tenpa is uncle of Rinchen, escaped to India in 2007, later returned to Tibet, according to Xinhua. It also claimed that the Chinese authorities in Tibet 'have vowed to continue investigations into such cases and punish those responsible.'

"Since 2009, the Chinese authorities have been trying to denigrate those who self-immolated and even punishing their relatives and friends to prevent the wave of self-immolations in protesting against their wrong polices in Tibet. Without providing a single evidence, the authorities fabricated many stories of the self-immolators by using their state controlled media such as "People's Daily", claiming they were alcoholics, mentally ill, etc, all allegations are baseless and completely fabricated," said Nyima T.J, a Tibetan political analyst in exile.

"The self-immolation protests started after Beijing Olympic, now 109 Tibetan people, most of them young, including monks, nuns and students, have set on fire themselves; making the largest self-immolation struggle for freedom in world history. Almost all have expressed their desperation over the lack of Human Rights, culture and religious freedom and return of His Holiness the Dalai Lama to Tibet," he said.

"Chinese authorities in Beijing already labeled various to pointing fingers on Tibetan people and started to blame the Tibetan administration and His Holiness the Dalai Lama, after escalating in numbers and further increased tension," he added.

"However, the self-immolation protest has continued, no matter how much they have maintained hardline policies, and imposed more hardline policies or how strong crackdowns on Tibetan they carry out, it doesn't seem to work. Therefore, the authorities in Beijing must realise the reality of its wrong policy," he further added.