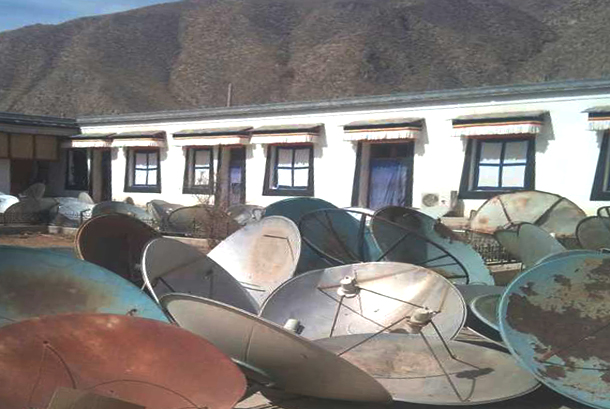 Dharamshala: Chinese officials continued their crackdown on access to foreign media in Tibet on March 10 through the dismantling of satellite dishes at the Labrang Tashi Kyil monastery in Labrang erea (Gansu province), Amdho region, eastern Tibet.

Observed as the official ‘Uprising Day’, March 10 is the 54th anniversary of the Tibetan uprising in Lhasa, rallies are held worldwide on this day n support of the Tibetan cause.

Monastery administration was ordered to remove and then burn their satellite dishes. They were then told these should be replaced, alongside new receivers, with smaller state sanctioned ones. These new devices only receive state controlled programmes; thereby blocking Tibetans from obtaining international media.

These new receivers are fitted with an automatic recorder and camera which are used as surveillance devices by the Chinese government television control office. If phrases such as “Free Tibet” of “His Holiness the Dalai Lama” are detected on this device then the officials are alerted and sanctions are carried out.

Earlier in January, Chinese authorities confiscated televisions and dismantled satellite equipment from 300 monasteries in the western part of the region. Cash rewards were announced for anyone informing the authorities about Tibetans holding back ‘illegal’ devices. Arrests and fines are imposed on those who are found to have such devices in their possession.

Local Tibetans explained that now that it is illegal for them to watch television or hear radio from the outside world, the only channels available to them are Chinese propaganda ones.

According to the Communist party, who gave a speech in January regarding the matter, this move is part of a government effort to stop Tibetans from viewing and listening to foreign broadcasts. This move was justified by them in saying that the foreign media are responsible for encouraging the security lapses in the recent past.

“Under the guise of combating ‘separatism’ the Chinese government is blatantly violating Tibetans’ rights to the freedom of expression, religion, culture, and movement,” said Sophie Richardson, China director of Human Rights Watch. “The authorities have a responsibility to uphold public order, but that cannot be used as a blanket justification for the kinds of measures to limit communications that the Chinese authorities are imposing in Tibet.”

Major crackdowns have been implemented on the availability of western media in Tibet since 2008 by the Chinese authorities, for alleged distortion of the Chinese Communist party’s repressive Tibet.