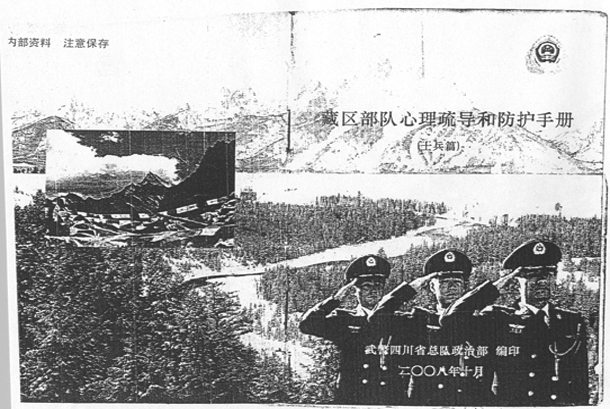 Dharamshala: - The Chinese police have achieved international notoriety for their severe and brutal crackdowns on protestors inside Tibet and other parts of China.

A document highlights the increasing psychological trauma being experienced by members of the People's Armed Police Force (PAPF), the Chinese Police in Tibet.

The Chinese language manual, titled "Guide on Psychiatric Wellbeing While Maintaining Stability" was published by the Sichuan Provincial Political Department of the People's Armed Police Force and was circulated to the members of the PAPF in Sichuan.

According to the TCHRD, the manual was drafted by experts in psychiatric health departments of armed police hospitals and includes 29 questions and answers that focus " on providing guidance to some PAPF officers on effectively dealing with the common psychological traumas", caused by the horrors of their work in Tibet and to " further improve the quality of capability of stability- maintenance work in Tibetan areas, particularly the PAPF officers and other armed forces who need thorough educational and ideological guidance on their work".

The Chinese government describes the PAPF's duties as to "perform guard duties, handle emergencies, combat terrorism and participate in and support national economic development" in 'peacetime' and to assist the People Liberation Army (PLA) in defensive operations in 'wartime'.

The manual describes protestors as 'troublemakers' and states that some policemen become "uncomfortable and confused", when they see maroon robed monks protesting. It further states that "such reactions diminish the strength of armed force's valour and resolve in punishing troublemakers".

In the past, Chinese police have shot at unarmed demonstrations and have also been accused of arbitrary arrests and torturing prisoners. The whereabouts of many of these prisoners are also unknown.

The popular international publication, the Economist once stated in an article, titled 'China's Crackdown' that the Chinese police pick up people "under arbitrary detention rules and then, they are made to disappear'.

China's is also one of the last single party systems and authoritarian regimes remaining in the world.