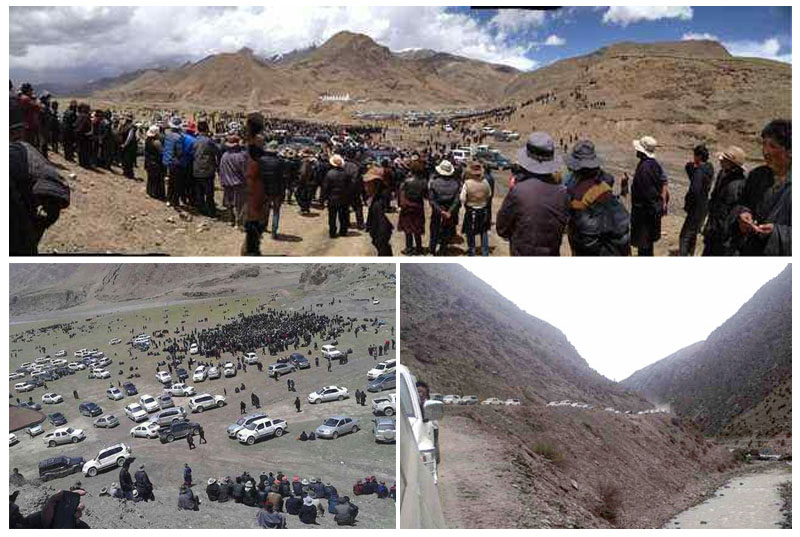 On May 24, 2013, Over 1,000 trucks loaded more than 5,400 Tibetans from the four major areas, including Pekar, Nagshoe Phudha and Tsala gathered in Dathang town, near the sacred mountain in protest of the growing Chinese mining tensions in the county; said Mr Ngawang Tharpa, an exile Tibetan in Dharamshala, citing contacts in the region.

The mountain is called Lhachen Naglha Dzambha, rich in mineral resources and it has the Gyalmo Ngulchu [Salween River] running through its foothills. Sources said the local Tibetans on Saturday ultimately managed to stop the mining at the holy Mountain.

The current situation is tense in the Driru county (Chinese: Biru in Nagchu Prefecture, Tibet Autonomous Region), where the local authorities deployed over fifty military convoys to the protest site, according to sources from inside Tibet.

Sources said amid concerns over possible clashes between security forces and Tibetan villagers. Two protesters named Gonp and Abu were killed in a vehicle accident on their way to the protest site.

A large number of Chinese workers arrived in the area in August 2010. Local Tibetan villagers were told they were building a dam, but apparently said nothing about mining. Later Tibetans surrounding villages then gathered at the site to oppose the construction. Finally, the Chinese themselves then left the area in September of the same year.

As for the minerals extracted, copper, chromium, gold, lead, iron and zinc are the minerals of greatest interest to Chinese and other foreign miners operating in Tibet. These are being mined to different extents at various locations throughout the Tibetan Plateau.