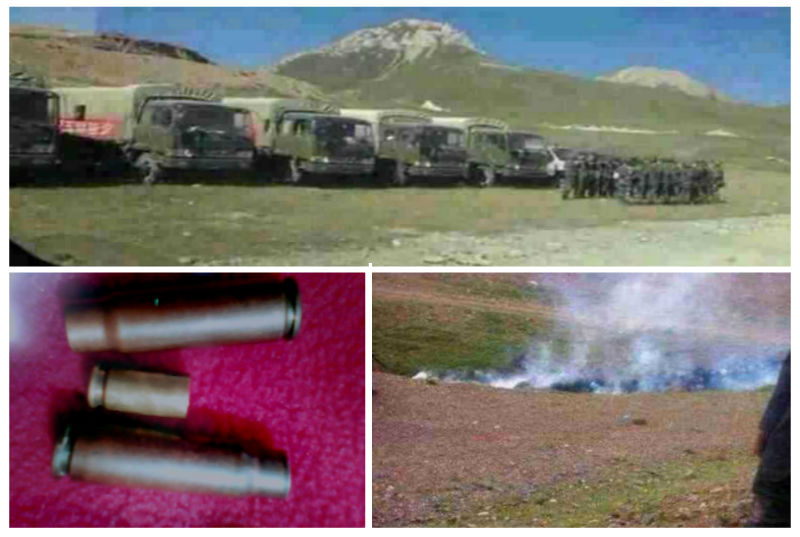 There were reports of an attempted suicide by Sogpo Choedup and the disappearance of another Tibetan man, Khentsa Sodor following the 16 August crackdown. Chinese authorities warned of severe punishment including arrest and imprisonment if the Tibetans continued to protest. Armed police tore down a huge poster that carried Chinese president Xi Jinping's recent message on environmental protection. By displaying the banner, Tibetan protesters had sought to remind local authorities about Xi's recent pronouncements on environmental issues.

India based Tibetan Centre for Human Rights and Democracy (TCHRD) said that the violent crackdowns on anti-mining protesters are not new in Qinghai Province. In recent years, Chinese authorities have sought to silence any kind of local opposition against environmental destruction by brute force in Yushu Prefecture. On 30 May 2009, local Public Security Bureau officers from Yushu County fired live ammunition and tear gas on local Tibetans in Shidag Village in Surmang (Ch: Xiaosumang) County for protesting illegal mining activities, according to a petition filed by Yushu Tibetans in 2010.

More than 12 Tibetans were severely beaten and sentenced on false charges of political activities. Since then, local Tibetans calling for environmental protection in SNNR region have been threatened and intimidated as officials openly order them to shut up or meet the same fate as those in Shidag Village. Officials also threaten to cancel government aid in poverty alleviation and relocation housing if they continue protesting against environmental destruction.

Local Tibetans complain that authorities tend to label their protests as politically motivated and ignore urgent environmental issues raised through such protests. This, they say, makes it easier for the local authorities to justify their crackdown and to conceal their shady financial dealings with illegal miners.

Successive Chinese leaders have emphasised the importance of the SNNR in countervailing climate change and to preserve the overall ecology of the Tibetan plateau. On 19 August 2000, to mark the creation of the SNNR, former president Jiang Zemin erected a special sign outside the entrance of the nature reserve to emphasise its importance in environmental protection. On 24 January 2003, China's State Council in its Document No. 5 upgraded the SNNR from provincial to national level nature reserve, thus underscoring the region's status as "China's water tower".

As recently as May 2013, Chinese president Xi Jinping vowed that China would "never pursue temporary economic growth at the expense of environmental degradation". Xi also said environmental polluters whose activities cause serious consequences "must be brought to account, and should be held accountable for a lifetime."

The SNNR region has the world's highest concentration of biologically diverse flora and fauna with more than 70 different species found only on the Tibetan plateau such as Tibetan antelopes, Tibetan wild donkeys, black-necked cranes and precious minerals and rare medicinal plants. The region is also the source of largest number of snow mountains, glacial deposits and rivers. It is also known for its rich mineral reserves, and the Yushu Dachang Gold Mine is one of the top ten newly discovered mines and one of the biggest untapped gold mines in the People's Republic of China.

The creation of the SNNR, Asia's largest nature reserve, affected over 16 Tibetan counties and 5.6 million people in Yushu Prefecture, according to official Chinese sources. Consequently, tens of thousands of Tibetan nomads were relocated in the name of restoring the ecology of the grasslands when the SNNR was formed.

But destruction of environment has continued unabated despite the creation of San Jiang Yuan nature reserve. Moreover, environmental protection laws passed by the Chinese government have failed to protect the environment or to hold the polluters accountable in accordance with law.

Majority of Tibetan protests against environmental destruction has occurred in the SNNR region, thus supporting local Tibetans' contention that Chinese miners in collusion with local authorities are engaging in illegal mining activities in environmentally protected area. In fact, Tibetans who protested on 13 August have claimed that Chinese miners used fake documents to demonstrate mining permission from central government authorities. Local Tibetans feel shortchanged when the authorities fail to live up to the promises made during the creation of SNNR.

In March 2010, a month before a deadly earthquake hit Yushu Prefecture, a group of Tibetan nomads from Surmang County visited Beijing and submitted a petition to the central government authorities detailing illegal mining activities and their hazardous consequences on the life and livelihood of Tibetans living in the SNNR region. The petition mentioned a Chinese businessman, Zheng Qingfeng (National ID no. 350302197801250319) from Putian City in Fujian Province who in 2003 came to Dachog Village in Surmang Township of Yushu County to carry out mining. For the next five years, Zheng, in collusion with local authorities, engaged in rampant mining and resorted to unsafe ways of dumping chemical waste. Consequently, a large number of grassland in Dachog Village was destroyed, making it difficult for nomads to graze their herds. Moreover, the petition said extensive use of chemical substances in mining caused the death of nomads' herds and severely harmed the health of women and children in the area. The petitioners also reported an alarming rise in the number defective births and infant mortality rate.

According to the petition, unrestrained mining and dumping of chemical waste in Shichu river in Surmang County caused various diseases such as esophagus, intestinal and stomach cancer among local inhabitants. Petitioners also reported that extensive mining carried out by the Qinghai Xinyu Mining Company in 2006 at Kar Ri (White Mountain) in Rima Village of Layu Township (Yushu County) caused an earthquake near the mountain, which led to the collapse of many houses in Rima, Gyachub, Malung and Chushim villages. The worst affected were nomads from five villages in Lhashug Township. The petition reported that private mining companies continue to operate in the SNNR region including Chumarleb (Ch: Qumalai) County, Dzatoe County and Nangchen County.

The petition called for thorough investigation into illegal mining activities and conviction of those responsible for pollution according to domestic Chinese legal provisions. It explicitly mentioned articles 6, 18, 41, 44 and 45 of China's Environmental Protection Law, all of which had been consistently violated in light of illegal mining in the SNNR region. In June 2013, China passed a new set of laws aimed at targeting environmental polluters with criminal punishment with the authorities admitting that its current laws have failed to effectively investigate environmental pollution cases.

No action has been taken so far on the issues raised in the March 2010 petition filed by Tibetan nomads in Surmang County.

Latest reports say Tibetans who protested on 13 August in Dzatoe County plan to approach the central government authorities in Beijing to file a petition. It remains to be seen whether their voices will be heard at the highest level of Chinese government or meet the same fate as Surmang nomads.