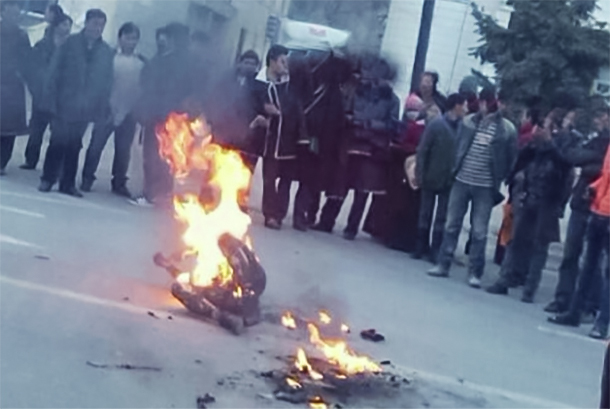 Dharamshala: - Chinese authorities have detained seven Tibetans in response to the latest self-immolation protest against Chinese repressive rule in Tibet.

Tsering Gyal, a 20-year-old Buddhist monk from Akyong monastery, set himself ablaze on Nov. 11 in Pema county in the Golok. He died the next day after calling for freedom for Tibetans and an end to Chinese rule, sources said. The seven detainees were accuced of involvement in Gyal's fatal protest.

Three of those detained were fellow monks from Akyong monastery. Several other monks from the monastery have also been questioned. Sources stated that "three laymen from Chokriyultso village- Tsewang, Bhumkyab and Janpo were also arrested. Their whereabouts, the charges against them, and their condition remain unknown."

Tsering Gyal's self-immolation has led to a security crackdown in Pema county. Groups of 15 Chinese armed paramilitary police are stationed at every turn of the road in the county.

"The police at one checkpoint then contact police at the next checkpoint to let them know the Tibetans are coming their way, in order to 'hand them over,'" the source said, adding that Internet service to the area has now been disconnected and local Tibetans are being restricted in their movements, with some searched at gunpoint.

Officials warn that if a self-immolation happens again, those involved will be severely punished.

The burning protest by Tsering brought to 123, the verified number of self-immolations since the wave of burnings began in 2009 in protest against Chinese repressive rule and of them 104 were reportedly passed-away from their severe burn injuries.  The Tibetan self-immolators called for freedom for Tibetan people and the return of Tibetan spiritual leader His Holiness the Dalai Lama to Tibet.