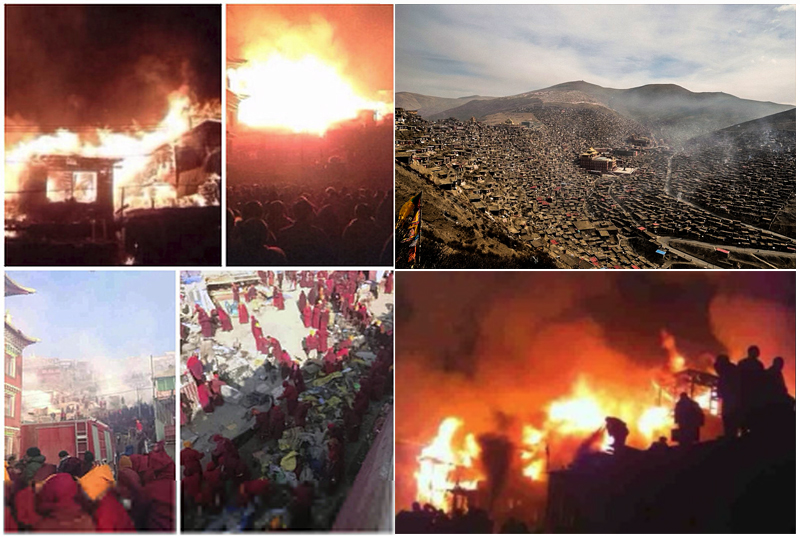 Dharamshala: - Reports coming out of Tibet say, a massive fire destroyed around 100 houses of Buddhist nuns studying at a prominent Buddhist academy of Serta Larung Gar in eastern Tibet.

There was no immediate report of casualties, and the cause of the fire was also unclear. A source however said the blaze could have been triggered by a butter lamp in a Chinese nun's residence," a Tibetan monk living in exile told The Tibet Post International.

According to the sources, "the wild-fire broke out Thursday, January 9, (8 p.m. local time0. "It was started in a nun's residence and burnt down over 100 houses located on the back side of their main prayer hall."

Photos and video footage however showed Serta Larung Gar and its residences of Tibetan nuns engulfed in flames that turned the night sky red.

Chinese media reports also said that more than 450 rescuers, police and firefighters took part in relief efforts. 'Efforts to put out the fire had no result. The huge flames were seen throughout the whole area,' sources added.

Sources said that 'the local officials and volunteers responded to the blaze and brought it under control some 10 hours after it broke out, the Buddhist academy in Serta County, (Chinese: Serthar County, province of Sichuan) eastern Tibet.'

"The damage to the nun's residences had been extensive, no lives were lost in the incident, only two Buddhist nuns were slightly wounded and they were taken to the county hospital," the sources added.

“On behalf of the Central Tibetan Administration and the Tibetan people, I expressed deep concern over the destruction caused by the fire in Serthar region, especially damages caused to the prominent Larung Gar Buddhist Institute," said Dr. Lobsang Sangay, democratically-elected Tibetan leader and political successor to His Holiness the Dalai Lama on Saturday.

"We hope and call for the quick restoration of this important learning centre so that it could continue to contribute to the preservation and promotion of study of Tibetan Buddhism and culture,” Dr Sangay added.

The Larung Gar Academy is located more than 4,000 meters (13,000 feet) above sea level. It was founded in 1980 by the late Khenpo Jigme Phuntsok, a prominent Buddhist scholar who played an important in revitalising the teaching of Tibetan Buddhism.

The institution is now home to tens of thousands of monks, nuns and students, who study the major texts of Buddhist philosophy and Tantra, the dialectics and logic, advanced levels of Tibetan grammar and composition.