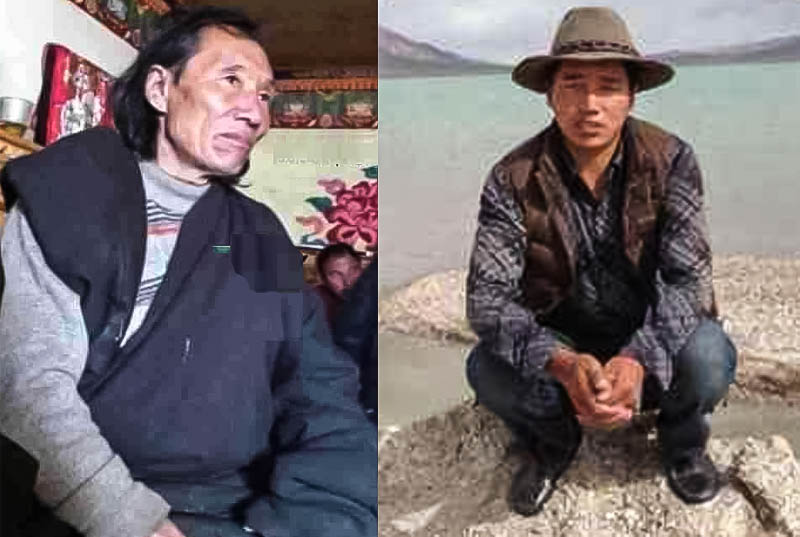 Both men Ngangtak, 54, and Rigsal, 31 were sentenced on 14 January 2014 for allegedly failing to fulfill their duties as villager leaders and in the case of Ngangtak, for instigating fellow villagers against the Chinese authorities. They were village leaders in Mokhyim Village in Diru County.

Both men Ngangtak, 54, and Rigsal, 31 were sentenced on 14 January 2014 for allegedly failing to fulfill their duties as villager leaders and in the case of Ngangtak, for instigating fellow villagers against the Chinese authorities. They were village leaders in Mokhyim Village in Diru County.

A source with contacts in Tibet told TCHRD that both men were detained and disappeared on 24 November 2013. Their whereabouts and condition continue to remain unknown to their family and friends. The exact charges for which they were sentenced are not known.

Family members of both men were not informed about the detention and subsequent sentencing. News of their sentencing became known through unnamed sources in Diru County Public Security Bureau (PSB) office.

Quoting local Tibetans in the area, the source told TCHRD that both men were punished for failing to suppress protests that erupted in Mokhyim last year after local Tibetans defied official orders to hoist five-starred Chinese flags on their rooftops. Residents of Mokhyim Village also took part in a protest last year in Diru County town when about 1,000 Tibetans from different villages of Diru County assembled to protest China's "mass line" campaign.

Mokhyim villagers also protested against the recent closure of Drong Na Monastery in which many monks were arbitrarily detained and some were sentenced in secret. Ngangtak was accused of holding of a secret political meeting with 17 others at his home last year.

Another Tibetan man identified as Trigyal from Mokhyim Vilage was sentenced to 13 years in prison. He has a wife and five children. No other details are available on Trigyal.

Ngangtak was born in 1960. He had been a villager leader since 1980 in Mokhyim. He has a wife and an unknown number of children.

Rigsal was born in 1983. He became a village leader around 2007. He has a wife and three children.

"Since September 2013, Chinese authorities issued strict orders to hoist Chinese flags on rooftops of each and every family in Diru County. This order was opposed by an overwhelming majority of Diru residents including ordinary nomads and farmers, monks and nuns, educated youths including even school children," the group said.

Diru County has witnessed sustained protests against Chinese repression in the past years, with the situation deteriorating considerably since last year, resulting in numerous known and unknown arbitrary detention, enforced disappearances, torture and even shooting of unarmed protesters.

Last year, Chinese authorities in Nagchu Prefecture begun implementing a notification which requires police officers to use secret codes when relaying information in real time about the movement and activities of Nagchu Tibetans visiting Lhasa. This extreme surveillance measure covers, among others, Diru County, Drachen (Ch: Bachen) County and Sog (Ch: Suo) County, all located in the eastern part of Nagchu Prefecture.