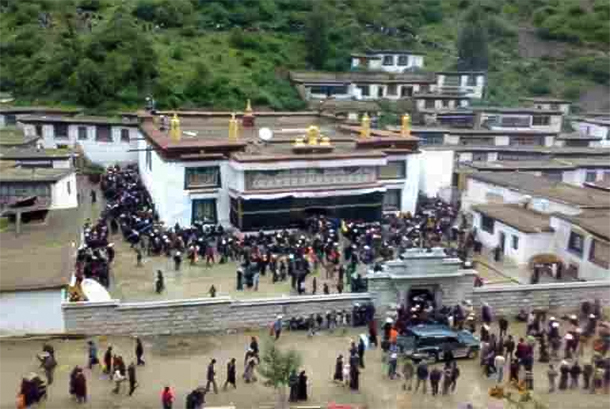 Dharamshala: - At-least 26 Buddhist nuns have been expelled from a Tibetan nunnery in eastern Tibet for their refusal to comply with new crackdons, after the Chinese government increased restrictions on religious practice.

Source indicates that recent visits by work team officials who have conducted the "patriotic education" campaigns at the nunnery found 26 nuns who are "not registered" with the Democratic Management Committee (DMC).

"The authorities have expelled these nuns from Palden Kharkyodling Nunnery in Driru county, Kham region of eastern Tibet, after a massive "Patriotic Education" launched since September this year," Ngawang Tharpa told the Tibet Post International on Monday.

"Total of  26 nuns were expelled from the nunnery and they were ordered to return to their homes. After most of the nuns refused to renounce His Holiness the Dalai Lama," he added.

According to the source "work teams" have visited several times at the nunnery in September and they have conducted mandatory political trainings for the nuns to denounce and criticize His Holiness the Dalai Lama as a "splittist."

The so called Patriotic Education, a campaign which forces Tibetan monks and nuns to register with the Chinese authorities, those who do not possess a registration card or stay permit, are expelled from the monasteries and nunneries throughout Tibetan areas.

Source inside the region stated that "about 140 nuns who have registered with DMC are allowed to study at the nunnery. But, many more live without with DMC fled to the remote mountains to hide following days."

'Those nuns who have not registered with the DMC and those who have resisted the patriotic education classes, are forced to leave the nunnery, or go into hiding when work teams visit their nunnery,' it said.

'The nunnery currently is under an increased restrictions imposed by the Chinese government, following a new crackdown on nuns, attempting to limit their religious practices,' it added.

"These nun are living there under difficult circumstances, no idea where to go and some were crying out loud after they were expelled from their nunnery," source said.

"The nunnery however, was a Kagyu school established in 1488 by Dungchen Sonam Dhondup, son of Yeshe Khandro Sonam Paldren, which later became as a Geluk school. It was rebuilt in 1984 by a group of nuns led by Choezom, following its destruction during the Cultural Revolution," TPI learned through our sources.