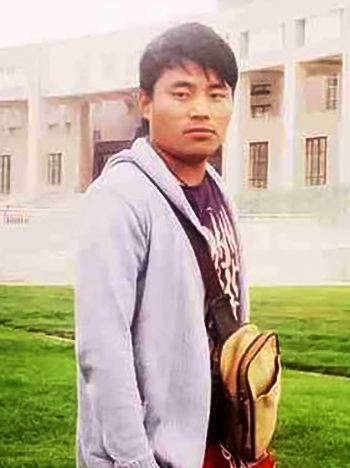 Dharamshala: - In further crackdown on Tibetan dissents, a Tibetan blogger has been arrested by Chinese authorities in Ngaba County of north-eastern Tibet for his writings allegedly engaging in splittist activities.

"Meo Soepa, a 21-year-old Tibetan blogger was detained by Chinese security officials from a bus on his way from Meruma township to Ngaba County, on December 28, 2014," Kungyam, a Tibetan living in exile told The Tibet Post International.

According to sources, "the locals fear that Soepa may be held for his writings. However there is no information on the reason for his arrest and no charges have been made public."

Sources said that "authorities may have accused him of organising discussions and writing critical articles that — one of his articles called for freedom in Tibet, while other paid ribute to Tsepe Kyid, a 20 year old Tibetan girl who died after burning himself on 16 December in Ngaba County."

Born in Meruma township in Ngaba County of northern-eastern Tibet, Soepa is a second year student at the Northwest University for Nationalities in city of Gansu Province in Northwest China. His family ran a small shop where they sell DVDS and CDs.

The Ministry of Information Industry and the State Council Information Office promulgated new rules in 2005–tightening the restrictions for freedom of expression, including a heavy control over Internet news information services, and electronic bulletin board systems and blogs.

Many Tibetans, including monks have been arrested and jailed in recent years for circulating information about protests and cases of self-immolation.

More than 50 Tibetan men and women, including writers, bloggers, singers and environmentalists, have been detained or are imprisoned, mostly after sharing views or information about conditions in their homeland.

Reporters Without Borders ranks China 175 out of 180 countries, for freedom of the press and Amnesty International calls China an "authoritarian state" as does the U.S. State Department and the EU.