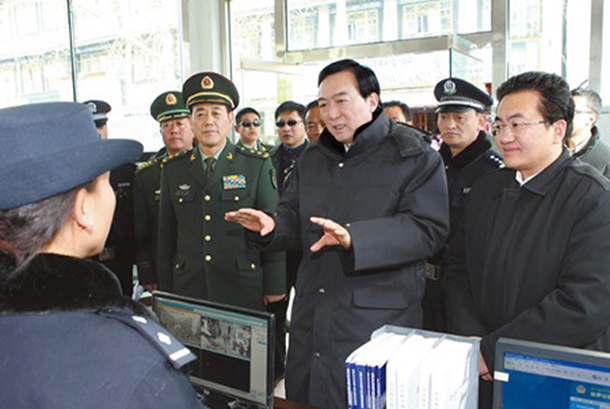 Dharamshala: - The Chinese investigators claims to have found 15 Communist Party officials in Tibet joined underground organizations, provided intelligence to the Tibetan spiritual leader and his supporters or participated in activities deemed harmful to China's security, a party agency said Wednesday.

The reports carried in major state-run newspapers, the party's official mouthpieces said that "the fourth Central Discipline Inspection team reported that from its investigation in Tibet, the struggle against splittism was still complex and grim."

A report in Beijing Times, another state-run newspaper said that "a small number of Party members and cadres have irresolute political stances, and the work of stability maintenance must be strengthened."

The publicising of CCP officials supporting Tibetan separatism was highly unusual and suggested continuing unrest in the occupied region, which has had a heavy security presence since a wave of 2008 peaceful protests against Chinese repressive policies toward Tibetan people.

The involvement was uncovered last year during an investigation of a small group of party officials, according to state-run media reports citing to an article published by the Communist Party in Tibet. Fifteen officials received unspecified punishment for violating party and political discipline, the article said without giving details, including their including their names and positions.

However, it is still unclear why the cases were re-announced this week again. Chen Quanguo, the so called Chinese party chief in Tibet, last year described a 'new measure' that would make a big difference to Tibet and people in the region.

In response, Tibetan information minster, Ms Dicki Chhoyang, said: "Repression incites resistance, and such actions will further hamper any chance of long term stability sought by China within the region. Clearly this latest warning to Tibetan officials who revere His Holiness the Dalai Lama demonstrates that all is not well in Tibet after all."

The team's statement gave no details of these officials that the party members joined, the intelligence they provided or other activities that would have harmed national security.

Calls to party representatives in Tibet were not answered, and the discipline commission's phone number was not publicly available.

Journalists' access to Tibet is tightly restricted and all information from the region is extremely difficult to confirm. While details such as the name of the officials punished were not provided, it is likely they were Tibetans who practice Tibetan Buddhism of which His Holiness the Dalai Lama is the spiritual leader.

Ethnic minorities, including Tibetans and Muslim Uighurs from the neighboring Xinjiang region, make up about 6 percent of the Communist Party's 86 million members. They are recruited to fill posts at various levels as a key component of the party's united front policy, although the top party official in provinces and regions such as Tibet is always a member of China's overwhelming majority Han Chinese group.

A discipline investigator, Ye Dongsong, was quoted in the party-run Global Times newspaper as saying that the Tibetan regional government should focus on neutralizing separatists, maintaining social stability and more strictly monitoring projects in the region.

Stability maintenance refers to the raft of Party security actions aimed to forcing ideological and behavioral compliance with the regime.

Wang Gang, the secretary-general of the Tibetan Autonomous Region's disciplinary committee—the Party organ that ensures the Party line is followed inside the Party, alongside battling corruption—was quoted to the effect that an investigation had been opened against the "very small number" of cadres suspected of providing intelligence to "underground Tibetan independence groups and the 14th Dalai Lama."

Chinese government says it treats Tibetans inside Tibet fairly, and that it has poured billions of dollars into raising living standards in Tibetan areas.

In response, Tibetans say 'China has invested millions of Yuan in developing Tibet's infrastructure, without the consent of Tibetans in their homeland. The investments mainly benefit Han Chinese migrants and Chinese state-owned companies and contribute to the economic marginalisation of Tibetans.', and resent the government's strict limits on Tibetan Buddhism, culture and language.

"These Tibetans officials and those party cadres who disagreed with the Chinese government's new plan—to transfer another million Chinese into Tibet," Mr Nyima T.J., a Tibetan political analyst said, adding: I have always suspected that the Chinese population has increased in all Tibetan regions since China invaded Tibet in 1959 and China recently says more than 25 million Han Chinese live in Tibet, include 7.5 million in TAR."

"More than 100 Tibetans have self-immolated since 2009 to protest the Chinese government because it has pursued failed policies that repress and marginalize the Tibetan people," he added.