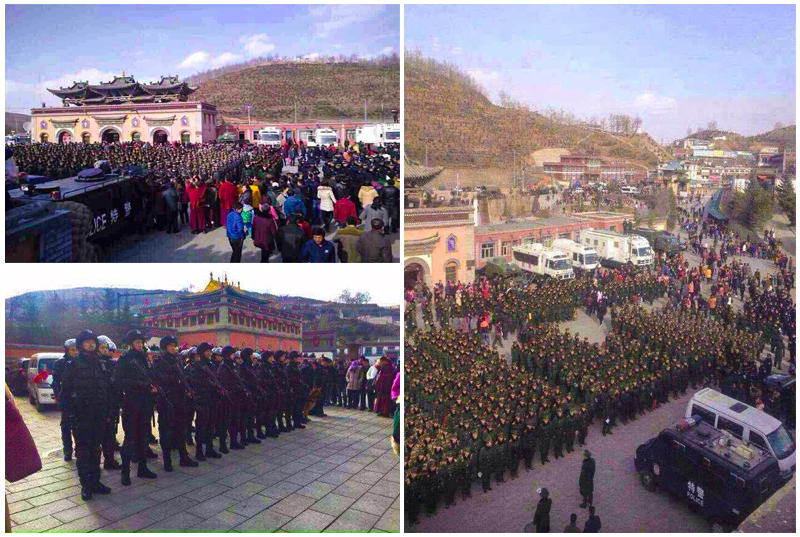 Dharamshala: — Emerging reports coming out Tibet say Chinese authorities have imposed a heavy restriction on Tibetans during during the final day of Tibetan Monlam Festival ceremony that took place in Kubum County, north-eastern Tibet, on Thursday.

Sources said that 'Thousands of Tibetans, including monks and pilgrims have gathered at the Kubum Monastery for the annual festival.'

Latest images received by the TPI also reveal heavy military deployments in these areas, where Tibetans reportedly severely repressed by the Chinese government.

"A crowd of Tibetans gathered at the Gomang monastery in Ngaba County on March 4, 2015, openly celebrated the 80th birthday of His Holiness the Dalai Lama —combines the traditional festival," he further said.

"A group of Chinese officials arrived at the scene. However no restriction or arrests were made at the time," he added.

Monlam Chenmo is a two-week period during which the Buddha performed various miracles. The two weeks of holy days are observed with the Tibetan Great Prayer Festival beginning on Tibetan New Year, and, on the final day - the Day of Miracles - many fesitvals and rituals are held.

"The last two weeks has seen a massive deployment of Chinese armed forces to several areas in the traditional Tibetan regions of Amdo and Kham — aimed at preventing protests ahead of the 56th Anniversary of the Tibetan National Uprising Day, which took place in Tibet's capital Lhasa on 10th March 1959," said a source on the condition of anonymity.