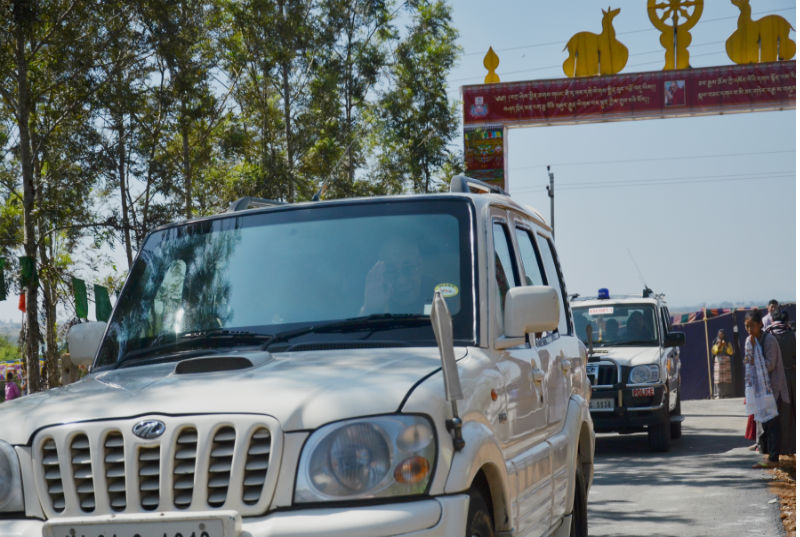 Bylakuppe -— On December 18, 2015, the spiritual leader of Tibet, His Holiness the XIV Dalai Lama cut the ribbon for the opening of the new Gompa at Tashi Lhunpo Monastery. Arriving to the sounds of long horns blaring and drums, His Holiness proceeded up the stairs to the decorated doors of the new prayer hall. Prayers were said and the doors were opened as His Holiness made his way to his seat which was made by wood carvers from the Ladakh region of India.

After the initial prayers. His Holiness asked that the abbot of the monastery, Khen Rinpoche Kachen Lobsang Tsetan be brought forward and then shared some very his personal feelings about the event. His Holiness became very emotional as he outlined some of the history of Tashi Lhunpo, a monastery that was founded by the First Dalai Lama, Gyalwa Gedun Drupa, in 1447 and was built in Shigatse, Tsang, Tibet.

Both His Holiness, the Abbott and some people in attendance were moved to tears as he discussed his karmic connection with the monastery as the IVth Dalai Lama and the importance of the event. Among those witnessing this most auspicious event were by Sikong Lobsang Sangay, representatives of the Karnataka state government, monks, lamas, members of Khen Rinpoche Kachen Lobsang Tsetan's family from Ladakh, and a crowd of over one hundred people from all the reaches of India and the world.

Tashi Lhunpo, which means "all fortune and happiness gathered here" or "heap of glory," has a rich history and is a major monastery in Tibetan Buddhism. In the 17th century, His Holiness the 5th Dalai Lama gave his teacher, Lobsang Choekyi Gyaltsen , then the abbot of Tashi Lhunpo, the title of Panchen Lama. The 5th Dalai Lama declared that the Panchen Lama would be continue to be reborn in an unbroken lineage. The monastery grew and became one of the great. monastic seats of the Dalai Lama and Panchen Lama. Over the centuries, many great scholars and monks studied there.

During the Communist Chinese invasion in 1959, thousands of Tashi Lhunpo monks, including senior lamas and scholars died. Chinese forces destroyed two-thirds of the monasteries' buildings during the "cultural revolution." In 1972, 5 monks, who had survived and fled the monastery in Shigatse, Tsang, Tibet, began the process of establishing the Tashi Lhunpo Monastery in exile at the Tibetan refugee camp in Bylakuppe, India under the guidance and patronage of the XIV Dalai Lama.

The consecration of the hall was held in the morning of December 19, 2015.