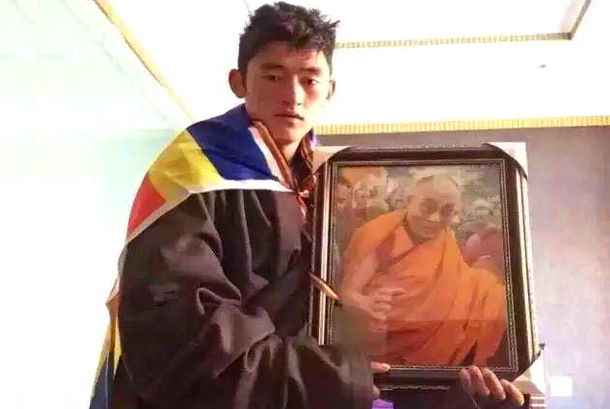 Dharamshala — Source coming out of Tibet says a Tibetan man was detained by Chinese police in Dzoege County, Ngaba, North-eastern Tibet, after staging a lone protest against the Chinese government's repressive policies.

"Tashi Dhondup, a young Tibetan was arrested by Chinese authorities following a solo protest against China's suppression of religious freedom and Tibetan culture, on December 19, 2015," a Tibetan living in exile with close contacts in the region told the Tibet Post International.

Dressing in traditional Tibetan attire with a Buddhist flag on his shoulder and holding a huge portrait of His Holiness the Dalai Lama in his hands, Dhondup took to the main street of Ngaba's Dzoege county, protest against China's repressive policies in Tibet.

"The security forces immediately arrived at the spot and arrested Dondup," he said, adding that "the current condition and whereabouts of Dhondup remain unknown."
Sources stated that Dondup's uncle, Yeshe, aged 30, was also detained by the Chinese authorities the following day.

Dhondup was born in in Section 3 of Ponkya village in Thangkor township in Ngaba (Ch: Aba China's Sichuan Province) and lives with his mother.