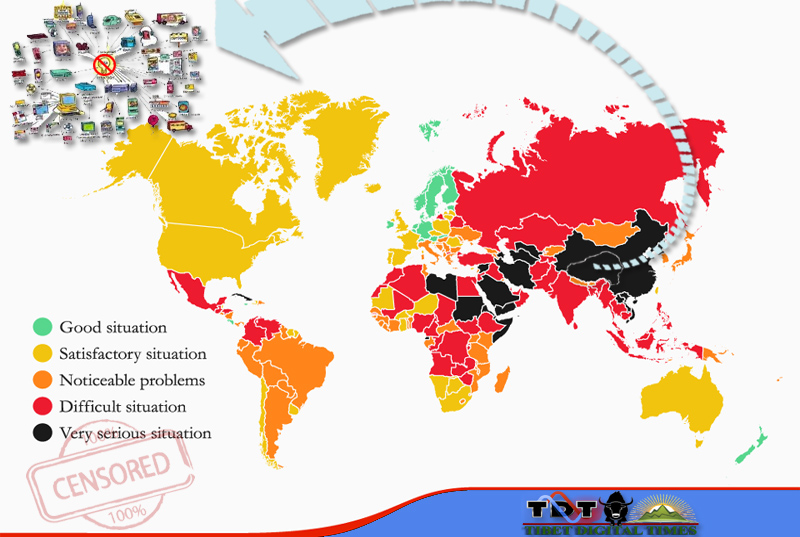 Dharamshala — The Beijing based Foreign Correspondents Club of China has voiced serious concern over restrictions on freedom of expression in Tibet, saying "Tibet remains the most intriguing and tightly controlled region in China today."

While foreign media outlets were granted some limited access to the Tibet Autonomous Region in 2015, China still rejected roughly three-quarters of the reporters who sought permission to visit last year, according to a new survey by the Foreign Correspondents Club of China (FCCC).

"The survey revealed deep frustration that China only allows foreign journalists to visit Tibet on government-approved trips; employs an opaque process for selecting those who can join these trips; and restricts freedom of movement while there," the FCCC said as it released the study.

While Chinese authorities apparently believe that restricted access will prevent "negative" reporting about issues in the region, the survey results suggest the opposite may be true.
Journalists said a lack of access to Tibet increases their reliance on exile sources and overseas academics, who may have particular agendas and lack up-to-date information.

By contrast, the few journalists granted permission to visit to Tibet in 2015 said it improved their knowledge of the region and Chinese government administration there.

The FCCC also surveyed journalists on their perspectives about diplomats and foreign government officials who have been allowed to visit Tibet. A vast majority of those responding said these foreign diplomats and officials are not doing enough to press for greater media access to the region.

The survey -- based on 142 responses from foreign journalists based in China, including 35 from non- FCCC members -- revealed the following:

The government may be slightly more open to arranging group trips for China-based foreign correspondents. Journalists from more than a dozen foreign media organizations were allowed to join three group reporting trips to the region in 2015. Among the media organizations that visited Tibet in 2015 were ABC Spanish Daily Newspaper, Bloomberg, Russian TV, Kazakhstan TV, Le Figaro, Der Spiegel, ANSA, Mainichi Shimbun, Yonhap, Singapore's Lianhe Zaobao, the Financial Times and Reuters. (Links to some of their reports can be found at the end of this report.)

Large numbers of journalists are still shut out. Nearly three-quarters of those seeking to report in Tibet (49) had their applications rejected. Only one respondent to the survey reported receiving approval for an individual reporting trip to the region.

Many journalists aren't applying because they believe they won't get permission or will be subjected to unacceptable reporting restrictions. Only 36% of journalists said they or their organization had applied to conduct a reporting trip to Tibet in 2015.

Journalists say the procedures for seeking permission to visit Tibet are opaque and difficult. Of those who applied to conduct trips, 30 (or 79%) said that the process was not straightforward and that details about costs and the itinerary were insufficient.

"It was a totally opaque process, with very little short term notice," wrote one responder.
"Not straightforward at all," wrote another. "Very (little) information about the itinerary and costs, and the selection of journalists who finally went to Tibet was arbitrary."

Several of the journalists allowed to visit Tibet in 2015 found the trip worthwhile, despite reporting restrictions: "Not perfect but it was good to get this trip," said one reporter. "We got some very good material, especially our photographer."

"In general, I found the trip useful in the sense that it gave me a glimpse of Tibet, the government's policies and point of view. There was no chance to do independent reporting per se or freedom to travel to regions or areas that were not included in the trip, nor could I extend the trip on my own. But it was better than nothing. I asked all questions that I wanted to officials, who candidly responded with their own discourse to my questions about more sensitive issues that you don't usually see explained in state media or press conferences in Beijing. Yes, it was heavy on propaganda, but I was able to get a picture of how the government sees Tibet and how it envisions its future."

"Reporters of the five Indian media organizations with registered offices in China ... were invited to travel to Tibet when the first batch of Indian pilgrims for the Kailash yatra arrived in Yadong on a newly opened route. In Yadong and Lhasa, there was reasonably free access."

According to the survey results, the bulk of the foreign journalists who visited Tibet in 2015 did so on a five-day November group trip organized by the Ministry of Foreign Affairs (MOFA). Notification for the trip was provided on the ministry's website in October, with a short deadline for applying. MOFA originally scheduled the trip for October, then delayed it, later rescheduling it with little notice to those who had applied. Selection criteria were not revealed and some journalists said after applying they were unable to confirm the status of their application with officials because the phones at the appointed office went unanswered.

Those selected visited Tibet from Nov. 16-20. Participants stayed at Lhasa Hotel and visited Potala Palace, Jokhang Temple, Sera Monastery, schools and an academy, a beer factory and Namtso Lake, where they visited a village and talked with the village leader.