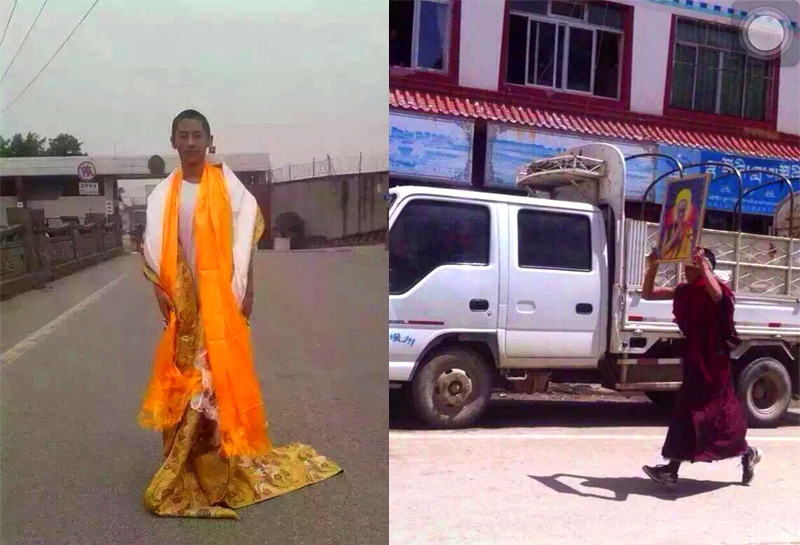 Dharamshala — Authorities in Ngaba County of north-eastern Tibet have released a Tibetan monk from prison after he served a two-year sentence for protesting against the Chinese government failed policies in Tibet.

Lobsang Tenpa, a Tibetan monk of Ngaba Kirti monastery was released at the completion of his two year prison term, on May 5, 2016. Tenpa was arrested soon after the protest on April 26. He reportedly suffered severe torture when he was in police custody.

Losang Tenpa, 19, was sentenced to two years imprisonment, by the Barkham Intermediate People's Court on November 7, 2014 for "separatist activities against the motherland," following his peaceful protest. Another Kirti monk, 20-year old Losang Gyatso, was sentenced to three years following a similar solo protest in April in which he called for freedom and for His Holiness the Dalai Lama to be allowed to return to Tibet.

Both were severely tortured on detention, after they demonstrated on the main street of the county town of Ngaba near the monastery, known among Tibetans as 'Martyrs Road' because it has been the site of a number of Tibetan self-immolations and protests.

Earlier TPI report said Tenpa wore a hand-drawn Tibetan national flag and called for freedom in Tibet, and that His Holiness the Dalai Lama must be allowed to return. The report said, Tenpa's family members were called to attend the hearing on November 7 at the Ngaba (Chinese: Aba) Tibetan and Qiang Autonomous Prefecture Intermediate Peoples Court but were given no opportunity to engage a lawyer on his behalf.

Tenpa comes from Meuruma township, in Ngaba, and joined Kirti monastery at a young age. He has two older half brothers who are both monks.

The Kirti monastery has been under strict Chinese surveillance after monks repeatedly set themselves on fire protesting against the hard-line policies pursued by the Chinese authories in Beijing.

Tibetan monks and nuns have been subjected to harsh 'patriotic re-education' programmes. Tibetan students have been sentenced to harsh prison terms for advocating for the right to use their language, and the friends and families of Tibetans who have self-immolated have been detained and interrogated.