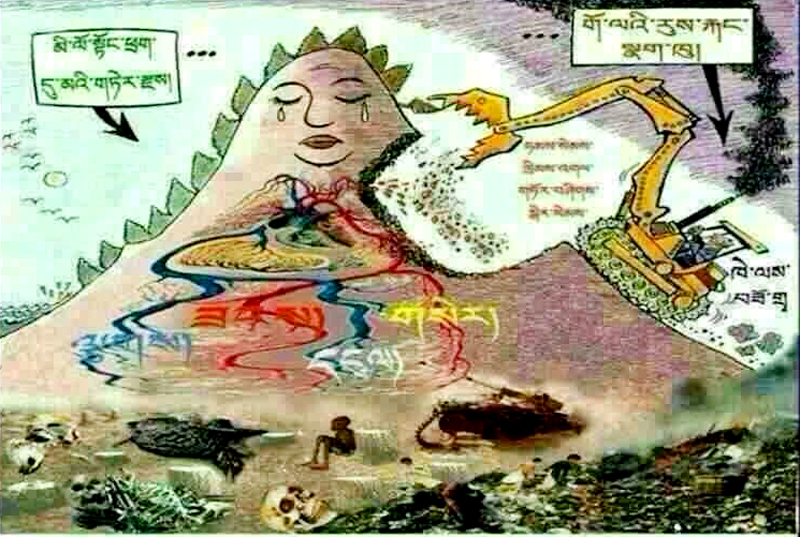 The protestors gathered at Demothang with a banner demanding for the halt of mining on the sacred mountain of Nyenchen Gong-ngon Lari which has been in progress for sixteen years in Amchok township, Sangchu (Chinese: Xiahe) county, Kanlho (Chinese: Gannan) Tibetan Autonomous Prefecture, Gansu province (Amdo region of north-eastern Tibet).

Received by the TPI, a symbolical drawing shows the sacred mountain of Nyenchen Gong-ngon Lari with a big Chinese excavator, which causes heavy environmental destruction. The drawing with words written in red, white and yellow, also called on the Chinese authorities to stop mining operations, saying their activities are  "Arrogant, Illegal, Destruction And Selfish."

Despite repeated appeals in the past, the mining has rather intensified. Furthermore, the use of machinery has deteriorated the environment in the township.

From an anonymous source, TPI learned that the armed Chinese paramilitary police soon reached the place and were ready to detain and oppress local Tibetan people.

"We are protecting the environment as it is very sacred for us and this is the reason why we are doing this. This kind of protest is allowed under Chinese law. The mining has already taken lives of two people in the past and no compensation was provided. It has also disturbed the relationship among the local people of the township. We are so alike environment. We can understand what environment has given us." responded one of the protestor on being demanded the explanation for the gathering.

According to the TPI source, "Tsering wanted to highlight the hardship and suffering of the local Tibetans harmed by mining activities." Sources said that Tsering was a "gentle character" and devoted to Tibetan freedom as well as environmental issues.

A video footage has also surfaced on YouTube, depicting local Tibetans confronting armed police forces, and showing banners in the background calling upon the authorities to discontinue the mining. A Tibetan speaking in the video can be heard making references to Chinese Communist Party leader Xi Jinping's speeches, which have voiced support for ecological and environmental protection. 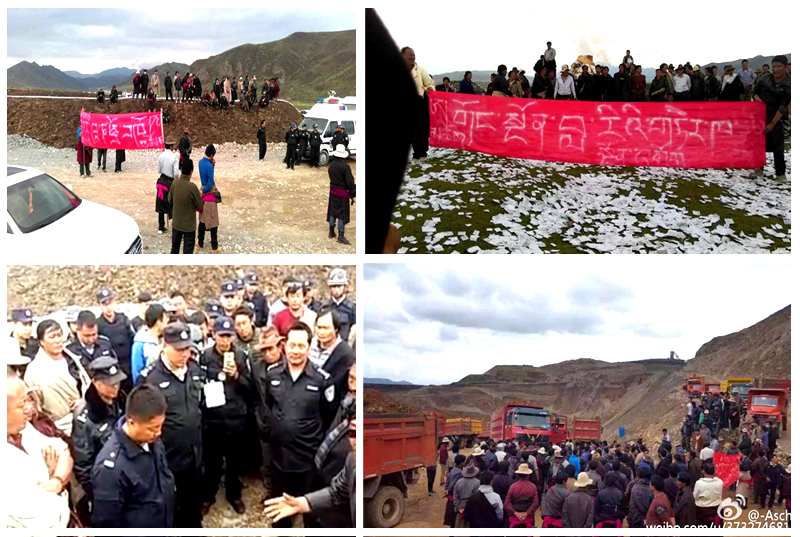 Our source who learned about the protest from his relatives added "Very less information is getting procured because of the increased and intensified police surveillance after the protest. This place has had many trucks taking minerals for sixteen years and it is still a newly discovered site. But this site has been the holy mountain for his people since forever".

In the last month, two similar major protests against mining by the Chinese on the holy grounds of Tibetans were reported in the Akhori Township of Chuchen County, Ngaba, Amdo and Yulshok Gargye in Minyak County, Kham Province of eastern Tibet.

Such protests against mining and to protect environment have become increasingly frequent, and dangerous, as the Chinese authorities accelerate large-scale mining in copper, gold, silver, chromium and lithium. Tibetans who express even moderate concern about the impact of toxic waste, deforestation, and large-scale erosion risk being imprisoned, tortured, or even killed.