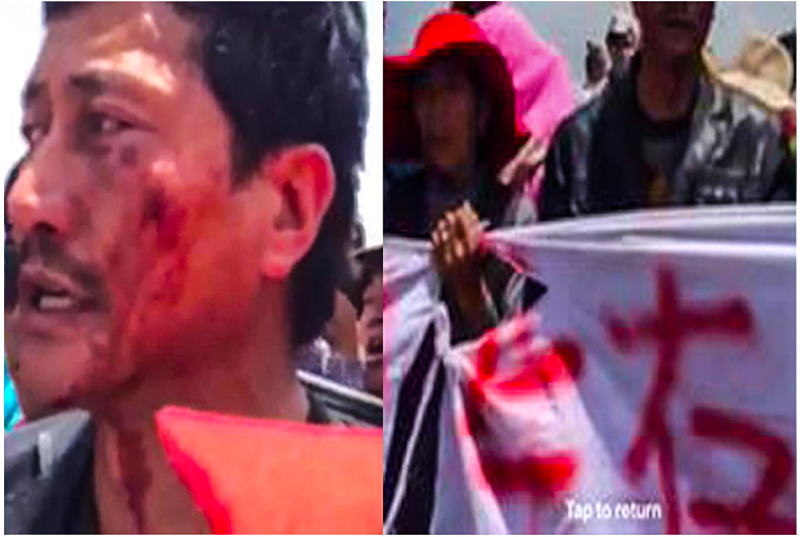 Dharamshala — Chinese police have detained five Tibetans, beaten several others severely, protesting over the threatened demolition of their homes, shops and guesthouses at the Tso-gnon Lake, in Amdo region of north-eastern Tibet. The assault followed similar crackdowns carried-out by Chinese authorities in the County last year.

"As many as eight people have been severely injured, to their heads and legs following a string of beatings in Gungho County," Lungtok Gedun, a monk from South India told the TPI, adding: "A large numbers of police force led by Dukjam the head of the local Chinese government arrived in two Tibetan villages of the rural County."

The monk said that "on June 23, local Tibetans protesting the forced closure of their small businesses were severely beaten by police near Lake Tsongon in the Chabcha region of Tibet" (Ch: Tibetan Autonomous Prefecture, Qinghai province, China.)

Latest photographs and video clips of the events also show hundreds of protestors-carried large white banners with slogans written in Chinese, saying, "we need to survive, we need to eat". In the footage, a man who appears to have suffered an injury to his face and head is visible as a Tibetan woman shouted "Look at what the county Communist Party leader has done to us."

Local Tibetans have thrived for centuries near the Blue Lake, known as Kokonor Lake or "Tso Ngon Po." The total demolition of Tibetan homes, shops and guesthouses has not only excluded the commercial participation by local Tibetans but has also driven their families from their holy place.

Those detained in Chabcha were identified Lhachen Kyab, Jigjey Delek Gyatso, Rinchen Bum, and a woman named Tashi Dolma and all five were residents of Trelnak township's Karla and Dhose villages in Chabcha. However, one detainee's name and other details, including their health conditon are not available immediately.

Although the number of protesters have increased somewhat since the crackdown of 2015, the tension is further increased, as a result in massive demolitions of local Tibetan community income sources.

In October last year, Chinese authorities equipped with bulldozers have demolished more than 240 Tibetan homes and shops, which has left over 960 Tibetans homeless in Kala village in Serchen county, Amdo Tsolho, north-eastern Tibet.

The last year destruction in Kala village followed by just few days, a similar operation in Trelnak, in which "Chinese officials and police arrived and tore down 30 structures built by the Tibetan nomads as dwellings and place of business around the holy Kokonor Lake (Tib: Tso Ngon Po).

The TPI previously reported that "Several Tibetan nomads were detained and severely beaten before being released. Some of them were, reportedly threatened at gunpoint by Chinese police before they were taken into custody."

Following the destruction of their homes in last year, Tibetans returned to their area to attempt to collect their belongings. But Chinese authorities refused them access, beat them severely and held them in custody for hours without charge.