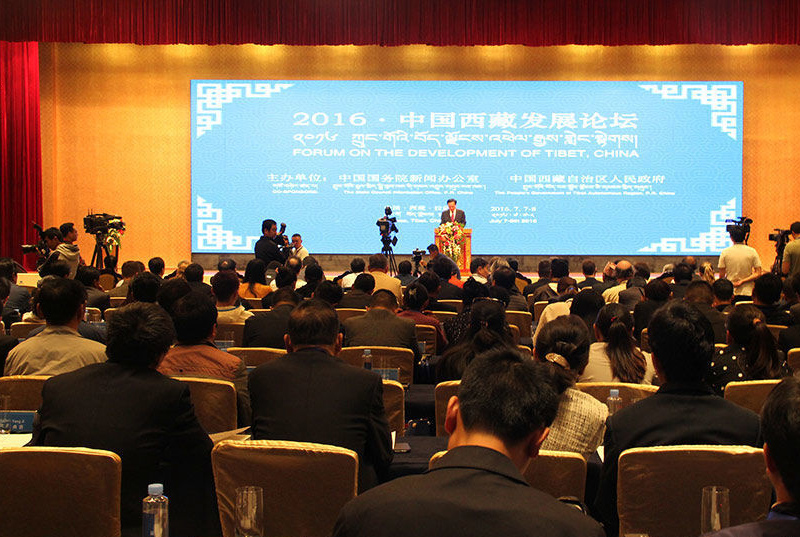 Dharamshala — China's State Council Information Office (SCIO), the Tibet Autonomous Region (TAR) government, and the Lhasa municipal government held the 'Forum on the Development of Tibet' in Lhasa, the capital of Tibet, on 7-8 July. Despite previous failure, 2016 'Lhasa Consensus' draws some foreign delegates to endorse the Chinese government policy and propaganda on Tibet.

According to the Chinese state-run media, over 130 scholars, officials, and experts from more than 30 countries and regions attended the forum. This is part of the biannual conference on the development of Tibet Autonomous Region started by China since 2007.

From the state-run media's report, five following themes were discussed in different panels of the forum: 1) the new period of Tibet's development: innovation, harmony, green, openness, and sharing; 2) innovation and development: opportunity and choice; 3) green development: potentiality and advantages; 4) open development: new prospect from 'One Belt, One Road'; 5) sharing development: accurate poverty alleviation and reformation of the well-being.

The Chinese government propaganda chief, i.e. the head of the Publicity Department of the CPC Central Committee, Liu Qibao, attended the opening ceremony and gave an opening speech. Liu praised the 'right way of development' that Tibet chose to follow under the Chinese Communist Party's (CCP) leadership. Liu asserts that Tibet must maintain the way of economic development and the unity of the Chinese nation.

China claims that a 'Lhasa Consensus' has been agreed during the forum. Xinhua posted full text of the consensus:

-- Tibet, the "Roof of the World" and the "Third Pole", has to continue construction and seek development at such a high altitude, when there is no successful precedent in the world to emulate. Over years of experimentation and practice, Tibet has embarked on a path of development that suits its unique conditions and yielded encouraging results. Tibetans have the right to pursue a better life. To seek sound development and the full protection of Tibet, and to build a new Tibet that is more beautiful, harmonious and happier are the shared wishes among all participants.

-- Tibet is home to its inhabitants with its distinctive regional culture. Effective measures have produced remarkable achievements in the protection, inheritance and promotion of its fine culture. Tibet, a place where the traditional and the modern harmoniously blend, has left an unforgettable impression on participants. In this context of rapid modernization and greater opening up to the outside world, combining cultural preservation with development is the best way to carry Tibet's outstanding traditional culture forward.

-- Protecting Tibet's environment is of great critical significance to China, Asia and the world. Tibet's development should give top priority to environmental protection and cultivate green models of development and living. Every tree and plant, and mountain and river, on the Qinghai-Tibet Plateau should be well preserved. The implementation of environmental-protection measures - including projects to build ecological protective screens; strengthen environmental protection and improvement; promote ecological economic growth and low-carbon development; and advance climate change mitigation - will certainly lead Tibet along a road of harmonious coexistence between humankind and nature.

-- The forum, in which people from around the globe discussed ways to boost Tibetan prosperity, is a positive action to show China's confidence and openness to the world. The event will help the world better understand Tibet and build consensus on it, which is beneficial to Tibet's development. Participants hope the forum will continue to improve and attract more talented people to advance Tibet's development.

In 2014, China also set up a 'Lhasa Consensus' using the same name on that occasion for an identical process. However, as reported by the BBC, some conference delegates revealed dissatisfaction at being associated with the pro-China document later on. Compared to 2014, the Lhasa Consensus this time did not make negative reference to His Holiness the 14th Dalai Lama, nor did it criticize the Central Tibetan Administration in Dharamsala, India.

Chinese state media published bits-and-pieces interviews of the delegates to show the delegates' praise of Tibet's rapid economic progress and critiques of previous prejudices and stereotypes on Tibet.

According to the state media's reports and footages, participants of the conference include Tibetologist Leonard van der Kuijp from Harvard University, Daniel Dudek, the vice president for Asia of the Environmental Defense Fund, and Christine Davies, vice president of the Asia Society.

The state media also highlighted the speech of French writer Sonia Bressler, who last year was praised by Chinese official news sources for writing about Tibet and speaking positively about the situation in Xinjiang. They also featured a senior correspondent from India, a Chinese language teacher from Minia University in Egypt, a Nigerian scholar, and a professor on religion from University of Latvia.

The Tibetan administration says that 'the main causes of the Tibetan people's grievances are China's policies of political repression, cultural assimilation, economic marginalisation, social discrimination and environmental destruction in Tibet'.

Free Tibet director Eleanor Byrne-Rosengren said: "The reality of economic development in Tibet is that the majority of Tibetans are marginalised spectators as Chinese migrants and businesses harvest the benefits of Beijing's policies. The second problem with China's approach is that only those who wish to be fooled by it, will be fooled by it. Intelligent people don't like being herded, overseen and treated like idiots and most delegates will know that the desperate attempt to hide things from them reveals far more about Tibet under Chinese rule than what's being shown to them."

During the meeting in Lhasa, some delegates sopke out positively about the situation in Tibet—despite many critics content the economy development benefits Chinese migrants more than Tibetan people that bring doubt, question, or stigma to the international community. However, none of the participants could give voice on the real situation in the region, where hundreds of Tibetan political prisoners are still in jail for expressing their views.

Many international organisations, governments and parliaments reported abuses of human rights in Tibet include restricted freedom of religion, belief, and association. Specifically, their reports say Tibetans have faced arbitrary arrest and maltreatment in custody, including torture at the hands of Chinese authorities— Freedom of the Press in Tibet is still absent, and Tibet's media is tightly controlled by the Chinese leadership, making it difficult to determine accurately the scope of human rights abuses.

Various governments have issued appeals for China to cease its oppression of Tibetans or requested international fact-finding delegations be allowed to visit Tibet, unfortunately mostly denied, except for a few, including a US delegation. After his delegation visiting Tibet, Jim McGovern, a Democratic congressman on the trip told reporters: "The Chinese government wanted to control as much of our visit as they could. And we saw what they wanted us to see."

Since the Chinese invasion of Tibet in 1949, an estimated 1.2 million Tibetans have been raped, tortured and murdered, thousands imprisoned and over 6,000 Tibetan Buddhist monasteries and institutions destroyed. A total verified number of self-immolations in Tibet to 144 since February 2009. Of these, 124 died while the others were either critically injured or their whereabouts and status are unknown.