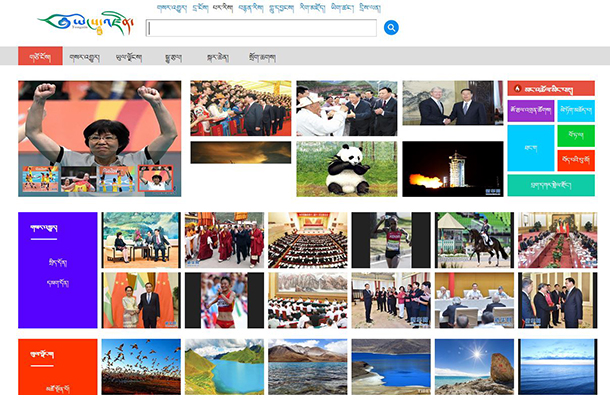 London — A new Tibetan-language search engine has been launched in the Qinghai province and state media has praised the service as a "world's first". However, Tibetan researchers have already noted that it is highly restricted and closely monitored.

The search engine named Yongzin, after the Tibetan word for "teacher" or "master" has been developed by the Tibetan Information Technology Research Centre with state funding. Its design and logo has been heavily inspired by Google, which is blocked in China, featuring sections for news, images, videos, and music.

As the world's first search engine solely in the Tibetan language it is being promoted as a positive step forward for China and part of an initiative to bring greater support to ethnic communities. But it is also an information control and surveillance tool that allows the Chinese government to monitor searches made by Tibetans, for what developers told state media is "information security" purposes.

Tibetans already face severe restrictions on communication and information sharing within Tibet so Beijing's ability to track how Yongzin is used could pose a danger to those who use it in an attempt to find out more about their culture or search for views which are contrary to the government's.

After the launch on 22 August the news website Quartz conducted an investigation into just how censored the service is and found that searching for "the Dalai Lama" in Tibetan does not provide any relevant links, including not showing the spiritual leader's official website. Similarly an image search delivers just one picture of His Holiness out of twenty results.

The news site also found that searching for "Free Tibet" delivers links about publications deemed illegal by China relating to Tibetan independence and even a search for "Tibetan tea" resulted mostly in images of Chinese officials drinking tea.

The investigation demonstrates that while the service may benefit some Tibetans who have previously been unable to circumvent internet restrictions, it is also a tool for heavily controlling what and how Tibetans view certain websites.

The launch has come in the same week that saw authorities issue a textbook to Tibetans in the Qinghai province that details restrictions on peaceful protests and on the sharing of information on social media and with international platforms. Tibetans are warned that ignoring these rules will be regarded as "leaking state secrets" or "engaging in separatist activities" and will lead to criminal prosecutions.