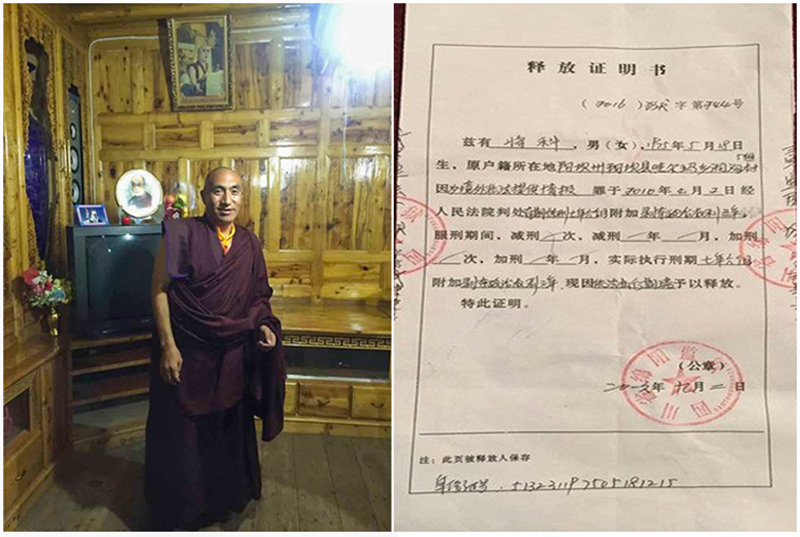 Dharamshala — Chinese authorities in Ngaba County of north eastern Tibetan have released a Tibetan monk jailed since 2009 on a charge of allegedly sharing information about self-immolation protest in 2009.

Jangkho, a monk from Kirti Monastery in Ngaba, Northeastern Tibet was released from prison by Chinese authorities after serving a sentence of 7 years and six months, a Tibetan source told TPI on Monday, speaking on condition of anonymity.

Jangkho comes from Jolep village in Ngaba County, the Amdo region of Tibet (Ch: Tibetan and Qiang Autonomous Prefecture, Sichuan Province) , and was residing at Kirti Monastery in Ngaba.

He is 41 years old. He was allegedly taken by Chinese authorities without any reason or accusation and sentenced to serve six years in prison. He was finally released on September 2nd.

A contact within Tibet explained, "in 2009 after the first self immolation occurred within the Ngaba region, many protests and self-immolations followed. It was during this time, on March 3rd, that Jangkho was arrested by the Chinese authorities and his whereabouts remained unknown for a year."

"On April 2nd, 2010, he was officially charged with separatist crimes and spreading state secrets, and ultimately sentenced six years in prison."

As he was released from the prison, the Chinese prison authorities have issued a notice, saying "Jangkho has completed 7 years and 6 months of imprisonment."

Upon his release, Jangkho was welcomed home by his family and local villagers. He was greeted by his younger siblings and parents, who both turned 80 this year, all of which were wrought with worry over his safety through the previous years.

The Tibetan self-immolators have unanimously called for the return of His Holiness the Dalai Lama and freedom for the Tibetan people.