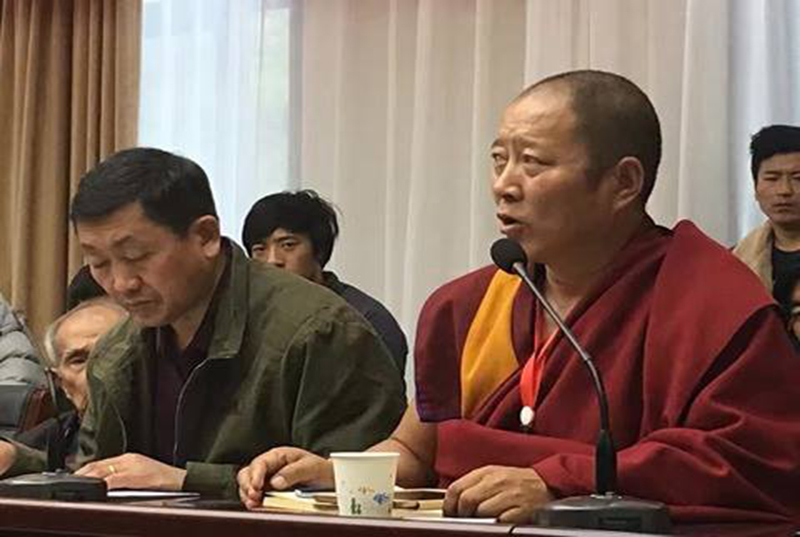 Dharamshala — In a provincial meeting of leaders in Qinghai province, a senior monk from Rebkong Rongpo monastery in the Northeast region of Tibet, spoke out to Chinese officials, calling for the pre-condition-less return of His Holiness the Dalai Lama to Tibet and reportedly said that government training and distribution of religious materials was not suitable for local Tibetans.

The monk, Jigme Lodro's speech from the meeting, which was held in 2012 to organize an effort to control Tibetan Buddhism, was received by TPI and later spread through social media.

"I have studied the materials provided by this training and meeting, and on page 26, line 16 it is clearly written that the door for dialogue with the Dalai Lama is always open. But after ten sessions of dialogue between Chinese authorities and representatives of the Dalai Lama, this lane of communication was closed, saying from today we will no longer speak with him. These two messages are obviously conflicting and what is written here is not true. If the door really was open, Tibetans and practicing Buddhists would be very happy.

"Secondly, on page 29 line 5, its clear that the Dalai Lama is welcome to return to Tibet, given he accepts the Chinese conditions.

"Wen Jiabao, former premier, was reported saying on the government's CCTV channel that the Dalai Lama could return whenever he wanted. But that's not what is written here, as in these materials he is clearly referred to as a separatist.

"Umalayam is a compromise, a middle way, for Chinese, for Tibetans, for Uyghurs and all other minorities under the Chinese authorities. This is what the Dalai Lama is fighting for. He already claimed long ago that he is not calling for Tibetan independence.

"I truly believe that if the Dalai Lama was invited to return to Tibet, if the Panchen Lama was released from prison, an honest dialogue could begin between Chinese and Tibetans and we could all live without conflict or protest. I hope that this is something we can work towards."