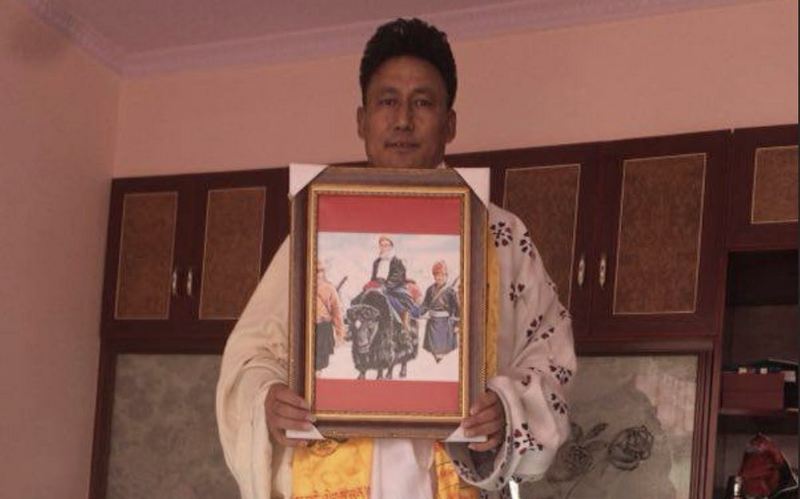 Lodoe Gyatso, 57, and his wife Gakyi were sentenced in secret in 2018 after his 28 January protest, according to reliable sources. News about the couple’s secret sentences comes over a year after Lodoe Gyatso’s peaceful protest after which Chinese authorities immediately arrested him, leading to his arbitrary detention in Sog county, Nagchu Prefecture.

TPI has learned that in early February 2018, Lodoe Gyatso was held in detention in Sog County, Nagchu Prefecture, having carried out a demonstration in Lhasa before his disappearance. He has disappeared from the Capital of Tibet on January 28, 2018, less than two years after his release.

Local sources previously told TPI that he wanted to organise a peaceful demonstration that would call for the return of the Dalai Lama, who he saw as a leader of world peace, to Tibet. The demonstration would also call for the demilitarisation of armed forces worldwide, including those of China, and for Tibet to become a zone for world peace.

Gakyi, Lodoe Gyatso’s wife, has been sentenced to two years allegedly for filming the short video shot just before his protest. In that video, Lodoe Gyatso talks about his commitment for world peace and non-violence under the guidance of His Holiness the Dalai Lama. The video reached Tibetans in exile in early 2018 along with the news of his peaceful solo protest and the short video was shared widely on social media. Information about Gakyi’s detention was not known earlier.

This would be the third time that Sogkhar Lodoe, a renowned political prisoner, is sentenced by Chinese authorities. Local authorities attempted to procure execution order for Lodoe Gyatso after the prison protest however, international intervention resulted in the extension of his sentence term. He was imprisoned for a total of 21 years in Drapchi prison in Lhasa and later at Chushur prison on the outskirt of Lhasa.

Born in 1962 in Sog county in eastern Tibet, he was first arrested in 1993 in a criminal case and sentenced to 15 years imprisonment. On 4 March 1995, while he was in the notorious Drapchi Prison, Gyatso wrote about his wish to protest against the Chinese occupation of Tibet. He subsequently read out loud a letter on this theme, distributed 300 hand-written letters and shouted pro-Tibet slogans.

Following this protest, he was subjected to torture and finally put forward for execution. After the intervention of the United Nations and other human rights groups, the death sentence was commuted to a further six years imprisonment. In 2013, after over two decades of imprisonment and in very poor health following the torture he experienced, Gyatso was released. However, in 2015 and 2016 he was repeatedly arrested and detained after expressing strong criticisms of the actions of Chinese authorities.