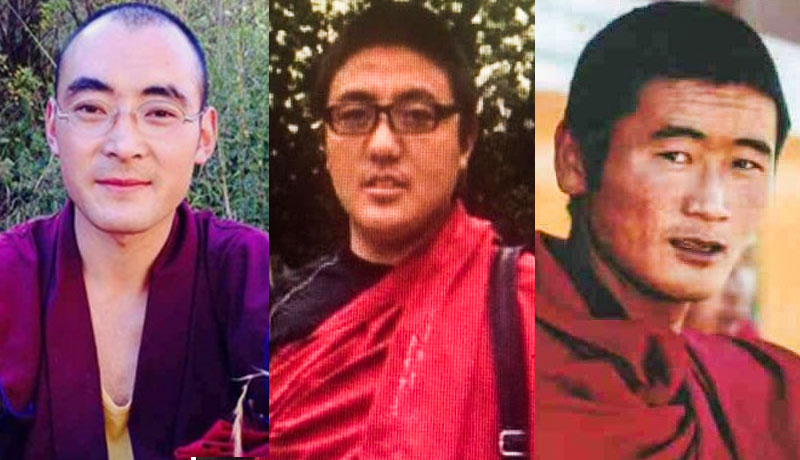 Dharamshala, India —Accused of unknown charges, a Tibetan Buddhist monk has been given a four-year sentence in July this year and his exact whereabouts and condition remain unknown. Two other Buddhist monks also from Kirti Monastery in Ngaba of eastern Tibet have meanwhile being missing after being taken into custody by Chinese police.

Three Tibetan Buddhist monks in their 30s, currently being disappeared and whose current whereabouts and conditions are unknown after being taken away by Chinese police, in the occupied region of Tibet.

"Lobsang Thamkhe, a 37-year old former monk at Kirti Monastery, was arbitrarily arrested in 2018. A Chinese court sentenced him to four years in prison on July 30, 2019. However, his current whereabouts and the charges made against him still unknown," Kanyag Tsering, spokesperson of the Kirti’s branch monastery in Dharamsala, India, told TPI on Wednesday.

“No details are available regarding what he was charged with and his whereabouts and condition also remain unknown to their family and friends.,” Tsering added, citing sources in Ngaba County of Kham, eastern Tibet.

'Thamke, a son of Lhade Gongme Lokho, had previously graduated from the Buddhist Youth School formerly attached to Kirti monastery in the County but later closed by Chinese government,' he said, adding: “they said they would not allow the school to operate as a part of Kirti monastery, and they transferred it to the county’s jurisdiction. But it was closed in 2002 due to a lot of difficulties.”

Lobsang Dorjee, a 36-year old monk in Kirti Monastery, was arrested sometime around August 2018, with his present whereabouts unknown. Dorjee, also a former monk in Kirti Monastery, was detained in the middle of the night during August 2018. The details of his arrest, whereabouts and current condition still remain unknown. He had previously been arrested and had served his three-year sentence for a protest he was involved in 2011.

Another monk called Thubpa, 32 was also taken by Chinese police at night from Trotsik Monastery in the same county sometime toward the end of 2017. He had previously been arrested for shouting political slogans calling for more freedom in Tibet and burning the Chinese flag during a period of widespread protests in 2008, and his father Kalsang was also arrested and jailed for shouting slogans calling more freedom in Tibet on March 16, 2011, against China’s rule in occupied Tibet.