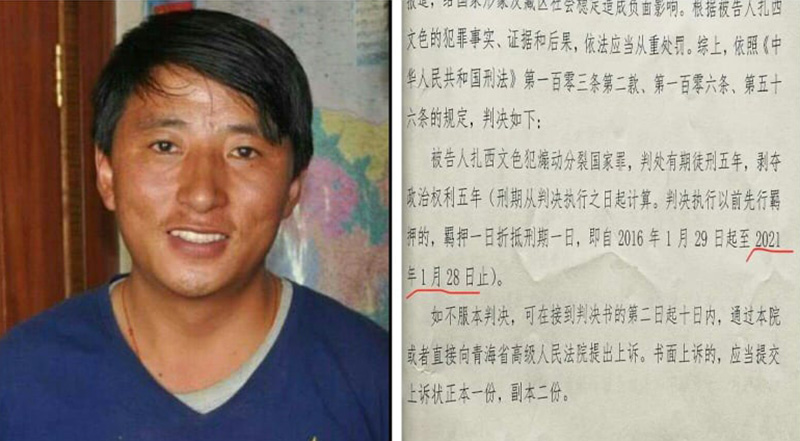 Dharamshala, India — Tashi Wangchuk, was released after serving his five-year prison term in Chinese jail. He is a Tibetan environmental and language rights activist imprisoned for speaking out about the lack of language rights under the repressive policies of China in occupied Tibet. He arrived at his second sister’s home in the afternoon of January 28, 2021.

Tashi’s family members informed his lawyer Liang Xiaojun that he is fine. No further information is acquired about him. Tashi Wangchuk is a Tibetan language advocate from kyigudo in traditional Kham province (ch: Yushu Tibetan Autonomous Prefecture, Qinghai province) of eastern Tibet. He was taken away from his home by local Chinese police in January 2016 soon after being interviewed by The New York Times. A New York Times' video of the interview – "A Tibetan's Journey for Justice" – was played as evidence during the hearing. In it, he criticised the destruction of Tibetan culture and details his attempts in Beijing to sue Yushu government officials for sidelining Tibetan language in schools.

"Within schools in Tibetan regions, from primary to secondary schools, most courses are taught in Chinese with Tibetan being taught as one single subject," Tashi said in the video. As an advocate for Tibetan language and culture, he has maintained a blog, writing about greater autonomy for Tibetans within China and has been vocal about language education. He has called for schools in Tibet to adopt a true system of bilingual education, so that Tibetan children can become fluent in their mother language. None of his writings have called for Tibetan independence.

He has also said that the dearth of effective Tibetan language education, and the fact that the language is not being used in government offices, violates the Chinese Constitution, which guarantees cultural autonomy for Tibetan and other ethnic regions. He was sentenced to five years in prison by Yushu people’s Immediate court on charge of allegedly ‘inciting separatism’ on May 2018. Tashi Wangchuk did not accept the accusation made against him.

Sikyong Dr Lobsang Sangay, the President of the Central Tibetan Administration said, “On this day when we welcome the news of Tashi Wangchuk’s release from the prison, it is imperative that we remember that like thousand others, Tashi Wangchuk was falsely charged, subjected to sham prosecution and unlawfully imprisoned for acts that are within, and in fact upholds, the provisions in the Chinese constitution.”

“The ordeal that Tashi Wangchuk and his family suffered in the last five years is but one example of the severe retributions that tens of thousands of Tibetans who advocate for Tibetan cultural and language rights face in China-occupied Tibet. At least 155 Tibetans have self-immolated in Tibet in protests against the PRC government’s oppressive policies and many of the protesters have lamented the deplorable state of Tibetan language and have called for its preservation and promotion,” Dr Sangay added.

“We unequivocally call on the PRC government to unconditionally release the thousands of Tibetans still languishing in Chinese prison and to put an end to further restrictions and surveillance”, said Sikyong Dr Lobsang Sangay.

“Tashi Wangchuk is released but he is not free. He will be under constant surveillance of the Communist regime of China,” said Rinzin Choedon, National Director at Students for a Free Tibet-India. She highlighted the harsh realities of the Tibetans like Tashi Wangchuk to bring out the truth about the systematic destruction of Tibetan language by the Chinese government in Tibet.