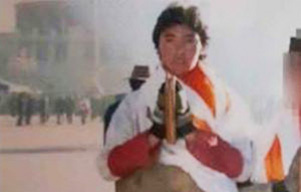 Dharamshala, India – A Tibetan man was arbitrarily sentenced to 13 years of imprisonment by Chinese authorities for allegedly helping Tibetans who are escaping to India. The arbitrary punishment came to light seven years later only under the excessive control and constant surveillance of China in occupied Tibet.

According to a source speaking on the condition of anonymity, “A Tibetan man called Namdak, from Kham Driru County in the Nagchu region, eastern Tibet was sentenced to a prison term of 13 years along with other six-seven people from the same region around July, 2013, and held in one of famous prisons called Chushul prison near the Lhasa, the Capital of Tibet”.

“The six-seven people along with Namdak, all of them sentenced to 13 years imprisonment, but their names, ages, as well as what charges were given are still unknown,” stated the source.

“Namdak hails from Tsela, Meri village, Driru county, aged around 34. He is suffering from appendicitis, but the Chinese local authorities have banned his family and relatives from visiting him over the past two years, therefore his health condition and other information are not known in detail,” the source told TPI.

“In 2013, around 30 Tibetans of Tsala township returned from India and were detained for two years in Lhasa. They were severely tortured, beaten, and applied other forms of mistreatment by the Chinese police while in the jail. Even after their release, they were banned from collecting Caterpillar fungus (Tib: yartsa gunbu) for three years, and forced into construction works and re-education centres. They can’t leave the town and county without seeking permission from the Chinese authorities even today,” the source informed.