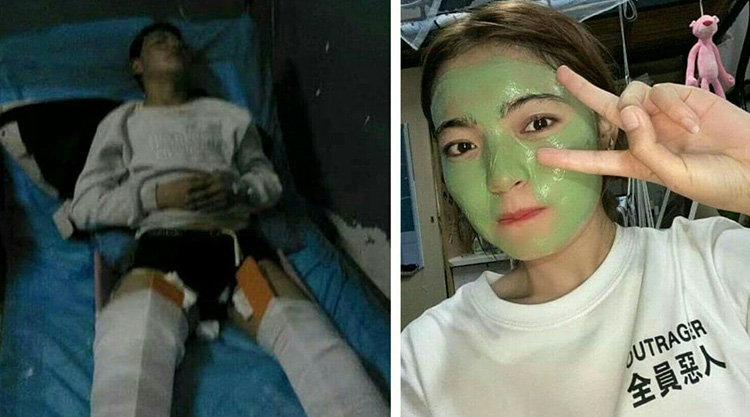 A young Tibetan man called Dadul, who is lying on the bed in a hospital with two broken legs and Sangye Tso. Photo: Free Tibet

Dharamshala, India – Three young Tibetans from Kyegudo, eastern Tibet, have been arrested by Chinese authorities for failing to register a WeChat group with local authorities. One of them was hospitalised after being beaten by Chinese police and two are still in custody.

According to London-based Free Tibet’s research partner Tibet Watch’s report, Chinese authorities arrested Dadul, Sangye Tso, and Kansi (a nickname) on February 17, 2021. Other detailed information was unknown. Recently, images came out this week of Dadul in a hospital with two broken legs, and he was hospitalised result of being beaten by Chinese police during forced interrogations.

Chinese police called Dadul’s family and asked 40,000 yuan (around £6,000 US dollars) to pay for surgery, allowing only two family members to bring it, The family was threatened not to tell anyone of the matter, as reported by the source.

John Jones, Campaigns and Advocacy Manager, at Free Tibet, said: “These young people have been brutalised for exercising a right that most of take for granted on a daily basis. I’d ask everyone to imagine if they had to invite a government official to every one of their chat groups or face imprisonment and broken limbs.

“While this news and the awful picture that comes with it, reaching those outsides of Tibet is unusual, these kinds of actions by the Chinese government in Tibet are not. Tibet has been sealed off from the world since the protests around the Beijing Olympics in 2008 making news like this almost impossible to get out for years after it happens but we still regularly receive stories of political prisoners dying in jail or shortly after release from long-sentences for daring to speak up against their oppressors in any small way" he added.

“Next week, 10th March, marks Tibetan Uprising Day, the anniversary of the brutally put down resistance to the Chinese occupation of Tibet in 1959. We call on every government around the world to take concrete action to remind the CCP that, try as they might hide their atrocities, we have not forgotten the Tibetan people,” John Jones expressed.