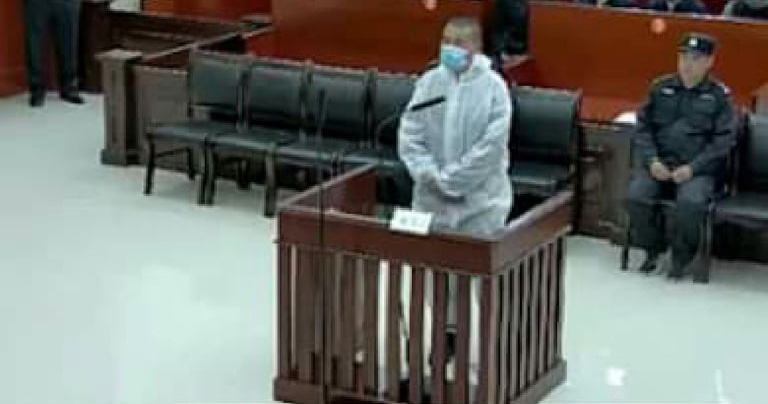 Tashi Gyal, while he is facing trial in a court. Photo: Human Rights defender

Dharamshala, India—Tibetan man sentenced to one year term by the Chinese authorities on October 13, 2020, for merely sharing teaching of His Holiness the 14th Dalai Lama and a picture of Dr Lobsang Sangay, the President of Central Tibetan Administration (CTA) on Wechat, Chinese social-media app.

According to a report by Human Rights Defender, a Tibetan named Tashi Gyal, aged around 50 was sentenced to a 1-year prison term for allegedly sharing teachings of the Tibetan spiritual leader and a picture of Dr Lobsang Sangay, the President of CTA along with photos of Tibet independence and Tibetan national flag on social-media. The Chinese authorities sentenced him to one year of imprisonment on the groundless charge of “splitting the nation”.

The source said that Tashi Gyal was born on May 24, 1970. He hails from Tso-ngon, (Ch; Qinghai) Golok, Machen district, Ragya town in the traditional Amdo province of Tibet. His sentence and arrest were supposedly related to his exercising freedom of expression on his social-media platform few times between 2014 - 2015.

His imprisonment is said to have connected him, forwarding four photos of 14th the Dalai Lama on May 19, October 12, and October 14, 2014, to his friend via the Chinese Social media app, WeChat. On January 1, 2015, Tashi Gyal posted photos of the Tibetan national flag and Dr Lobsang Sangay, the President of CTA in his WeChat moment, and received likes and comments from his WeChat friends.

The report pointed out, “on March 1, 2015, he shared a “ new year greeting video” that contains "Tibet independence" content to his friend through Wechat. On November 2, 2015, Tashi Gyal also shared pictures and short videos of "Looking forward to returning of the 14th Dalai Lama to Tibet" and Sikyong Dr. Lobsang Sangay in a Wechat group”.

As a consequence, Tashi Gyal was detained by the local Chinese authority on May 30, 2020, and formally arrested on June 12. On October 13, 2020, he was sentenced to one year in prison by the Golok Intermediate Court for “inciting separatism”.

According to the report: The Guoluo Intermediate Court did not hear the case publicly and gave him a secret trial. At the final trial, Tashi Gyal was sentenced to one-year imprisonment and his mobile phone was confiscated.

Tashi Gyal, born on May 24, 1970, a nomad in Golok, Machen district, Ragya town in the traditional Amdo province of Tibet.