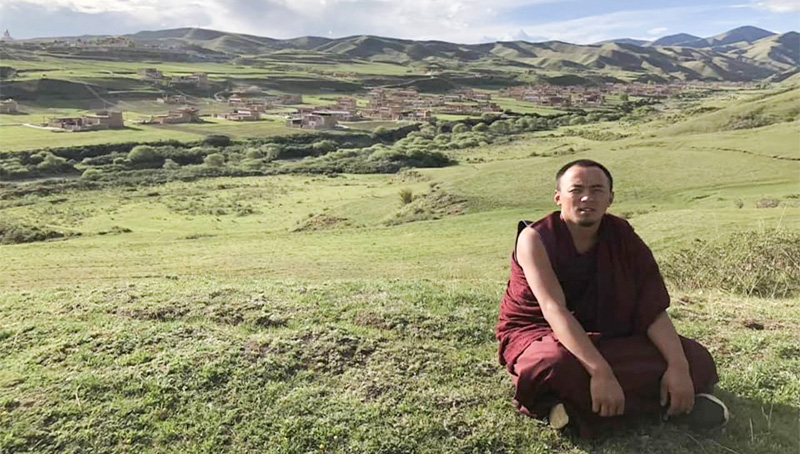 Dharamshala, India — A Tibetan monk who was arrested with two other monks on the night of August 1, 2019, in the occupied territories of eastern Tibet, has been sentenced to four and a half years in prison for allegedly communicating outside of Tibet.

According to a reliable source, "Rinchen Tsultrim, a 29-year-old monk from Kashul village in Ngaba County (Ch: Aba Prefecture, Sichuan Province), eastern Tibet, was sentenced to four and a half years in prison by an Intermediate People's Court in Chengdu, Sichuan province."

"On March 26, 2021, Ngaba County Police called Rinchen's parents and told them that Rinchen Tsultrim was sentenced to four and half years jail term, he is in a prison near Chengdu City", the source told TPI. Further information, including the date of sentencing and the reasons behind the imprisonment, are unknown, due to tightened control of blocking information flow and preventing news about Tibet to reach the outside world.

According to the TPI’s previous report, on March 23, 2020, Rinchen’s families received a notice from Chinese authorities. The notice states that his actions are 'sabotaging media and endangering public safety' under 124 of the Criminal Law of the People's Republic of China. Rinchen Tsultrim was arrested on the night of August 1, 2019, along with two other monks.

The two companions were released to go back to the monastery after a while. Rinchen Tsultrim was confined continuously in connection to his discussions and writing on Tibet issues with Tibetans abroad. He was imprisoned in Ngaba, Bakham since then and nothing else related to him is heard and known to his family and relatives. His arrest was believed to be related to his activities in 2018.

He was arrested twice with his younger brother Norbu Tsering in 2018, for discussing Tibet-related issues with someone from outside Tibet. The Chinese police came to know of this when they seized his cell phone and censored it. He was detained and banned from using WeChat, a popular Chinese messaging app.

In 2019, on His Holiness the 11th Panchen Lama’s birthday, he talked with a Tibetan living abroad for more than two hours which was voice tapped by Chinese authorities. He was also accused of importing rare and important scripts from outside Tibet and spreading them across many regions inside Tibet through post offices.

He has also been blamed for writing many Tibet-related topics on his personal blog, ‘Chetawa’ which has also been closed later. Earlier, he posted on social media, WeChat photos of his younger sister Kunsang Dolma studying in India attending educational conferences. The Chinese authorities implicated him by relating the act to be a political activity. Since then, he was under tight surveillance of local Chinese authorities and his every move was being restricted.

Rinchen Tsultrim is a 29-year-old monk from a humble family of farmers in Kashul village, Ngaba County, eastern Tibet. He has studied the philosophy of the Bon tradition. He has been studying in Nanshig Monastery which is one of the largest centers for Bon studies since he was six years old. His father Tashi Dhondup is 68 years old and his mother Tsomo is 57 years old. His siblings are Dukmo Kyi, Kunsang Dolma, Norbu Tsering, and Phulrab Tso.

He is an intelligent and hard-working man since he was young. He likes reasoning and logical philosophy studies. He is especially very concerned about the Tibetan language and the Tibetan people. He is invested in international current affairs, history, and very open-minded. The young monk is liked by everyone, particularly people at the monastery and his town. He is someone who holds the belief that Tibetan traditional knowledge along with modern education will bring great change for the better.

He further acknowledges that norms that do not benefit and resonate with modern ways and thinking should be corrected. He recognizes that Tibet’s hope for the future is to have specializations in the Tibetan language and a basic idea in Tibetan traditional knowledge should be founded. His idea of having patriotism for one’s nation is how and whether people protect their own language. One could clearly know his boundless love for his country, Tibet through all his writings, discussions, and talks.