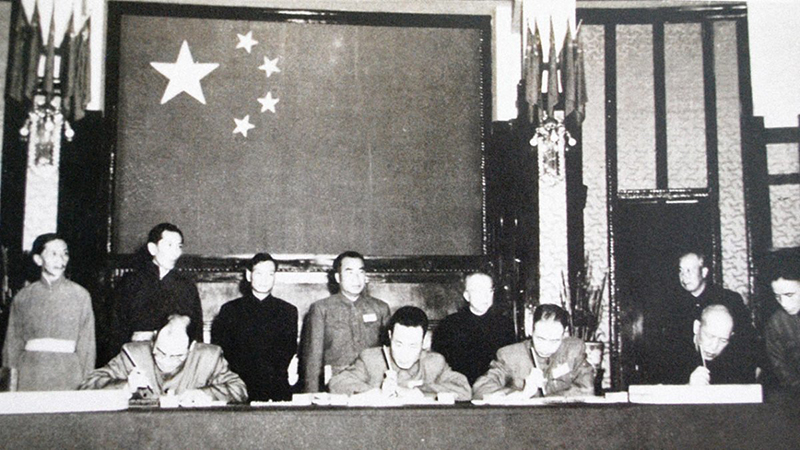 Dharamshala, India — "Tibetan people were subjected to imprisonment, beating, and torture beyond the limits of cruelty. Even today the situation in Tibet remains extremely heart-rending. Therefore, the true situation remains that it was not a "peaceful liberation" but a violent armed invasion and occupation which was carried out by the communist Chinese government in Tibet," said Tibetan Parliament-in-Exile.

The Tibetan Parliament-in-Exile released a statement on May 23, 2021, saying that, “on the 23rd of May this year, the government of China led by the Communist Party of China plans to hold a mass celebration to mark the 70th anniversary of its supposed peaceful liberation of Tibet. In connection with this event, the Tibetan Parliament in Exile would like to make the following statement on behalf of all Tibetans in and outside Tibet.”

“With the false claim of carrying out a peaceful liberation of Tibet, the government of China led by the Communist Party of China applied overwhelming coercion on the Tibetan side to compel it to sign the so-called “The Agreement of the Central People’s Government and the Local Government of Tibet on Measures for the Peaceful Liberation of Tibet”, which is in a word is known as the “17-Point Agreement.” It is to mark this grim occasion in the history of Tibet that the government of China is holding the celebrations,” said the Tibetan Parliament-in-Exile.

“As universally known since the start of Tibet’s rule by the first King Nyatri Tsenpo in the second century BC, Tibet had remained a complete independent country, both de facto and de jure. This had remained the true status of Tibet until 1949 the army of Communist China started its armed invasion of the country. In 1950, the situation in Tibet became highly critical, with its status as an independent country being under dire threat that even though His Holiness the 14th Dalai Lama was only 16 years old, he had to assume the dual role of being the temporal head and spiritual leader of the country. And for eight years since the communist Chinese government compelled the Tibetans with threats of overwhelming violence to sign the so-called “17-Point Agreement” in 1951, Tibet was left with no choice but to “handle fire even as it was being burned by it,” in an effort to seek a level of peaceful coexistence with the Chinese occupying authorities. But the Communist Chinese government ignored every provision of that agreement. The Tibetan people were dealt only with violent repression. This situation compelled His Holiness the Dalai Lama to leave Lhasa along with his cabinet to Tibet’s border district of Lhuntse to operate the government of Tibet from there. Along with this development, His Holiness the Dalai Lama declared that the “17-Point Agreement” had been signed by the Tibetan side under duress. Immediately after arriving in exile, His Holiness the Dalai Lama, the temporal head and spiritual leader of Tibet, issued a declaration at Tezpur town in the state of Assam in India on the 18th of April in 1959, renouncing the so-called “17-Point Agreement” with the government of China. The implications of this renunciation are that:

1) The so-called “17-Point Agreement” was not signed with the mutual consent of both Tibet and China. Rather, the consent was coerced on the Tibetan side with threats of use of overwhelming violence. As a result, this document had absolutely no legal validity.

2) The government and people of Tibet under the leadership of His Holiness the Dalai Lama had, for nearly eight long years, tried every possible means to seek accommodation for peaceful coexistence with the communist Chinese government. However, the leaders of the communist Chinese government kept violating every provision of that agreement. The conditions for implementing that agreement, therefore, did not exist at all. Hence, the Tibetan side was left with no other option but to declare its renunciation of that agreement. As a result, the agreement remains invalid.

3) It is nothing but an utter falsehood that the leaders of the Chinese government are still holding up that document in the name of an agreement to claim that 70 years have passed since they had peacefully liberated Tibet. Even after the signing of that so-called agreement, the army of the communist Chinese government dispatched successive bodies of troops into Tibet to eventually seize armed control over the entire territory by means of a violent takeover. Millions of Tibetan people were killed in the process.

And the Tibetan people were subjected to imprisonment, beating, and torture beyond the limits of cruelty. Even today the situation in Tibet remains extremely heart-rending. Therefore, the true situation remains that it was not a peaceful liberation but a violent armed invasion and occupation which was carried out by the communist Chinese government in Tibet. It is beyond any question that we could possibly agree with the celebrations of May 23 by the communist Chinese government at the centre and by its local-level government in occupied Tibet as the anniversary of the peaceful liberation of Tibet.

Likewise, we urge governments both in the eastern and western parts of the world, who support the just cause underlying the struggle of the Tibetan people not to give any recognition to this anniversary. In fact, to the Tibetan people, this remains to be recognized as the day on which the darkness of the communist Chinese government’s destruction of the religion, culture, and natural environment enveloped Tibet. The Tibetan Parliament in Exile, therefore, proclaims its recognition of this anniversary is celebrated by China as such a day of utmost tragedy to the Tibetan people accordingly".