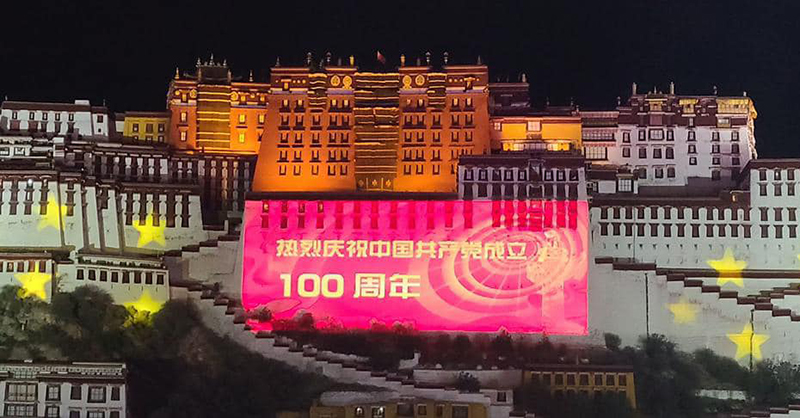 Chinese propaganda: Warmly celebrate the 100th anniversary of the founding of the Communist Party of China, recently displayed on the wall of the Potala Palace in Lhasa, Capital of Tibet. Photo: TPI

Dharamshala — An emerged footage shows the true face of Chinese colonisation and occupation after a courageous Tibetan woman from Potala Square openly showed the true frustration towards Chinese migrations in Tibet and that Tibet has already become another China.

A decades-long frustrated Tibetan woman with devastating experiences cries as she points to a live projection of Red China government propaganda recently shown on the front wall of the "Potala Palace" in Lhasa, and mobs of Chinese, largely gathered in Potala Square, rejoice at the event and photograph the nighttime screening, according to a live footage obtained by TPI.

Under impossible circumstances and conditions, she managed to take short footage that read large and wide in Chinese government propaganda: "Warmly celebrate the 100th anniversary of the founding of the Communist Party of China".

"I just walked through the square, up to here we Tibetans are not even allowed to do a single round (Shabkor in Tibetan) and nowhere in Tibet it is like another China, there are the damn Chinese everywhere."
The details of the woman, including her whereabouts, are unknown. TPI is very concerned for her well-being as any Tibetan who has expressed their feelings or views on the mistreatments under the authoritarian Chinese government in the past has been arbitrarily arrested and sentenced to long prison terms with inhumane torture and ill-treatment.

"It is absolutely understandable that she has no other option but to express her frustration because Tibetans in Tibet have lived for over seven decades and still live daily under the fear of arrest, detention, torture, and other ill-treatment. The traumatic experience of losing their own national language, culture, and identity grows when all these things are replaced by Chinese ones, such as hotel and restaurant logos, menus, school blackboards, merchandise labels, bus, train and airline tickets, official documents, road and street signs," said Yangchen Dolma, TPI managing editor.

"Recently, thousands of Tibetans have even been forcibly relocated from the homes they have owned for generations to rural areas as massive Chinese migrations move into major Tibetan cities where traditional buildings are destroyed and replaced by Chinese supermarkets, government offices, and hotels," she further said, added: "These facts clearly speak for themselves that Chinese migration is a priority and China wants a Tibet without the Tibetan people and their religion, culture, and language".

The last seven decades have seen constant political oppression, social discrimination, economic marginalisation, environmental degradation, invasion of the population, and cultural assimilation and eradication of national identity. The authoritarianism and autocratic nature of the Chinese government are pushing Tibetans to the edge of the cliff, resulting in thousands of deaths from the 1980s to 2008, including over 150 Tibetans setting themselves on fire to protest Chinese aggression and oppression in Tibet since 2009.

The 1,300-year-old Potala Palace with its red, white, and yellow walls represents respectively cultural and historical symbols of Tibet. The white wall, used as an arrogant propaganda platform by the CCP, which has destroyed over six thousand ancient Tibetan religious and cultural institutions and universities, once again shows the world the true dictatorship of President Xi Jinping.

Tibetan history books have been confiscated, buried or even burnt, newly rewritten history books published, historical treaty pillars with other countries erected for centuries in different cities and places confirming Tibet as a sovereign nation have been hidden and forbidden from public view.

The Tibetan Genocide is an ongoing series of human rights violations perpetrated by the government of China against the people of Tibet. Since 1949, the Chinese government, led by the Chinese Communist Party (CCP), has pursued totalitarian and repressive policies during the tenure of CCP General Secretaries from Mao Tse-tung to Xi Jinping, resulting in more than 1.2 million deaths and many more thousands held in secret camps without any judicial process.