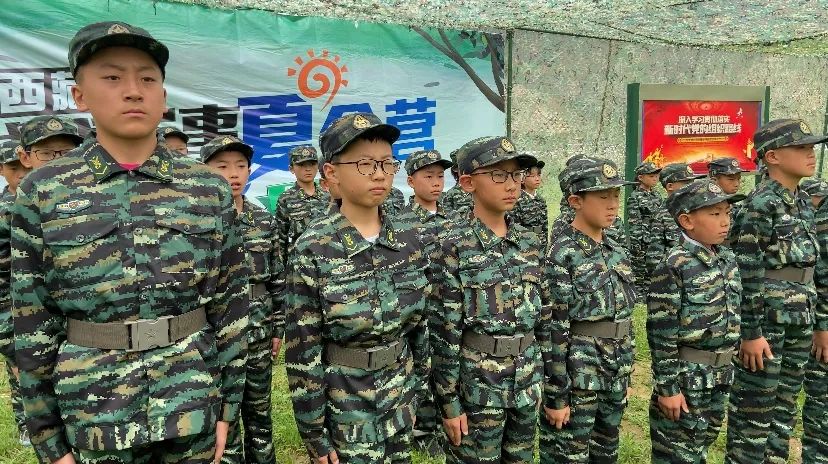 A report by the Chinese state propaganda media body "China Tibet Online" on 27 July 2021 stated that the "Snow Eagles" military summer camp was established earlier this year, but officially opened on 26 July 2021. These facilities were set up in an already heavily militarised area to educate Tibetan children during their summer holidays.

The report goes on to say, these military camps are an important step in national defence education. 'These measures aim to instill in the young Tibetan generation feelings of patriotism, the spirit of defending their country and love for China,' the report says. 'To strengthen patriotism and the spirit of national defence, physical strength, impart mental strength and stamina, and also improve the spirit of solidarity among the children,' the report continues, defining the purpose of establishing these camps.

When elaborating on the sole objective of the centre, the report further stated that "the establishment of a new defence training centre called "Tibet Rung He Military Training Centre", which aims to provide training that will produce disciplined and obedient children with strong physical strength, as they are the hope and future of the nation. Their education is closely linked to the nation and will determine the destiny of the nation".

'Within a short period of time after the camp was established, the children who remained at the camp for training had to undergo a crash course in military discipline, including many group drills and other physical activities,' explains a video clip released by the media showing children taking part in the training. The video clip also claimed that the 'Young Tibetan Snowhawk Military Summer Camp', located on the banks of the 'Draksam Tso' lake in Kompo Gyamda county in the eastern part of the so-called 'Tibet Autonomous Region', was the first such programme of its kind.

"One hundred students aged eight to sixteen were trained in this summer camp," says a report in "China Tibet Broadcasting", another Chinese propaganda news. "These students were generally from primary and middle schools in Lhasa. Since the summer holidays in Tibet fall in the months of June and July, students from these schools are sent to the military summer camp for training," the report continues.

'Through this summer military training, most campers can cultivate good behaviour, learn self-discipline and independence, strengthen their self-confidence, sharpen their tenacious will in the face of challenges, learn to unite and cooperate, and reap growth and happiness,' said Yao Chi, a Chinese official. The patriotic trainings are jointly sponsored by the "TAR Sports Bureau", the "TAR Education Department" and the "Liuwu New Area in Lhasa".

Over the past 70 decades, political oppression, social discrimination, economic marginalisation, environmental degradation and cultural assimilation have systematically aimed at destroying the national identity of the Tibetan people and transferring the national sovereignty of Tibet into China.

Totalitarian China began invading Tibet in 1949 and fully occupied the country in 1959. Since then, more than 1.2 million people, 20% of the country's six million population, have died as a direct result of China's military invasion and the destruction and burning of over six thousand religious monasteries, temples, shrines and sacred Buddhist scriptures.

Until 1949, Tibet was an independent nation in the Himalayas with a rich cultural heritage that united Tibetans with their own language, literature and art. As an independent state with three traditional provinces, "Kham, Amdo and Utsan", Tibet enjoyed its own system of government, national sovereignty, seal, army, flag, currency and language, all of which are completely distinct from its neighbours and other countries.