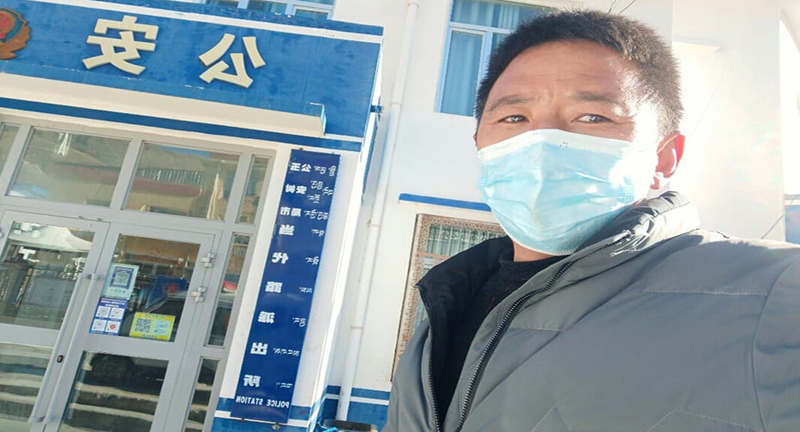 Dharamshala, India — Tashi Wangchuk, the former political prisoner and Tibetan language advocate, went to Yushu city to meet with top officials to ask them to strengthen the use of the Tibetan language inside and outside the government and schools, but later Chinese police summoned him to the police station and interrogated him for more than two hours.

According to Tashi Wangchuk's Weibo, he went to Yushu city to meet with the Chinese officials to ask them to strengthen the use of the Tibetan language inside and outside the government and schools on January 12, 2022, but the Chinese authorities prevented him from entering the government office and they told him, “do what is your business, do not do what is not your business.”

Five days later, on January 17, 2022, the Chinese police summoned him to the police station and interrogated him for more than two hours. During the interrogation, he was asked about his responsibility for Tibetan cultural education. He replied that at present, a minority language disappears every fortnight, so the issue of Tibetan script and language is of great concern to me.

He asked them, "May I ask, did you ask me to come and talk to you today because I broke the law or posted something on Weibo that was not true or was contrary to the facts? The Chinese officer replied that he is not looking at Tashi Wangchuk’s Weibo at the moment, they need to investigate before they can be sure, they are not stopping Tashi from going to government departments to tell his concern and posting Weibo.

“I think that by doing this and asking the above questions, the Chinese officials are using their administrative power to block and interfere with people's right to report their problems to the government and to protect officials, but also to eliminate the Tibetan script and language,” Tashi Wangchuk wrote his Weibo.

Tashi Wangchuk was released after serving his five-year prison term in a Chinese jail. He is a Tibetan environmental and language rights activist imprisoned for speaking out about the lack of language rights under the repressive policies of China in occupied Tibet.

Tashi Wangchuk is from kyigudo in traditional Kham province (Ch: Yushu Tibetan Autonomous Prefecture, Qinghai province) of eastern Tibet. He was taken away from his home by local Chinese police in January 2016 soon after being interviewed by The New York Times. A New York Times' video of the interview – "A Tibetan's Journey for Justice" – was played as evidence during the hearing. In it, he criticised the destruction of Tibetan culture and details his attempts in Beijing to sue Yushu government officials for sidelining Tibetan language in schools.

Wangchuk was awarded the International Tibet Network’s ‘Tenzin Delek Rinpoche Medal of Courage’ in July 2017; an annual award given to Tibetan human rights defenders who show a deep commitment to enhancing freedom and rights of the Tibetan people at great personal risk.