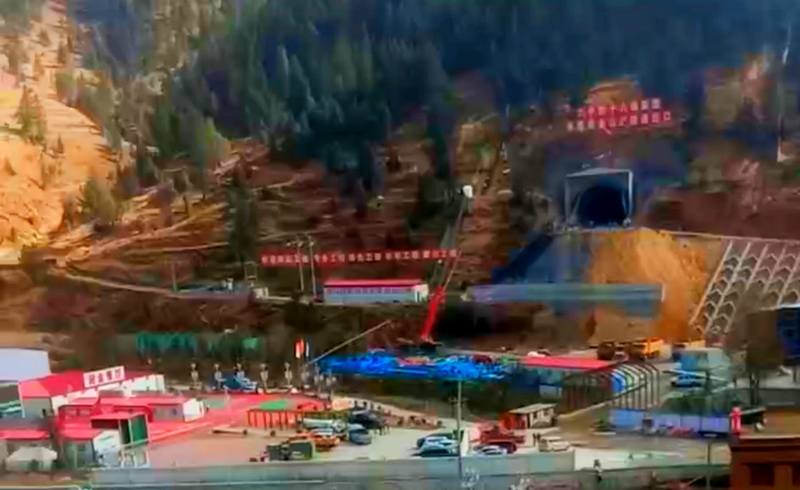 As China moves forward with the construction of the "Sichuan-Tibet Railway" and enters eastern Tibet, the environmental damage is enormous, the premeditated assault on Tibetan culture and the drilling of hundreds of tunnels under the mountains is systematic, including the cutting of sacred mountains, the deforestation and pollution of rivers providing drinking water is ongoing.

Several tunnels have already been drilled through the sacred mountains in the various counties between Dhartsedho and Nyakchukha, Golok, and Othok, near Lithang County, in eastern Tibet, according to exile sources in close contact with these areas of Tibet.

The Chinese authorities and workers, “ignoring our culture and traditions, are deliberately underground drilling tunnels to our holy and sacred mountains, where traditional prayer flags are placed and smoking rituals are offered on every traditional anniversary and festival, that are passed on from generation to generation, with the knowledge of how our belief system is strongly linked to these sacred mountains," said a Tibetan living in TPI, speaking on condition of anonymity for security reasons.

The railway continues with the drilling of tunnels to the sacred mountains, including Pawo Dragden, Anye Rapak, Yudruk Ngonmo and Asak Dzama. The tunnel to Dragden Mountain is nearing completion and a bridge is to be built over the Golok River and will connect to the tunnel on the other side, Anye Rapak, located south of Bardrong village in Golok County, and Anye Rapak, a sacred mountain in the county, which used to be covered with thick forest, but was completely razed and cut down by the Chinese in the 1970s and 1980s and all transported to China without the consent of the local Tibetans, the source said.

“The Chinese authorities in Beijing claim that the rich forests of Tibet are protected, but in reality China cut down all the great forests of Tibet when they first came to our land. Most of the major forests have been wiped out and the mountains and hills that have been razed are like shaved heads. Therefore, they say one thing and implement the opposite,”  said Ven Tsering Dorjee, a former political prisoner now lives in India.

According to Chinese official figures, the new railway line from Ra-ngakha to Nyingtri (in Chinese: Yaan to Nyingchi) is approximately 1,018.6 km in length, which includes 69 tunnels with a total distance of 841.7 km. Inside Tibet, the railway passes through many major districts, from Ra-ngakha, Dhartsedho, Minyak, Nyagchukha, Lithang, Bathang, Markham, Dzogang, Pashoe, Riwoche, Nyingtri, to Lhasa, the capital of Tibet.

"I confirm that the construction of the railway is progressing and has reached Golok county in East Tibet. It is usually said that when a country invades another country, development is something that is a duty of the invader. However, what development China has made, and what the people of Tibet have benefited from such development since the invasion of Tibet. We Tibetans know this very clearly,” Dorjee explained.

From there, the construction of the railway continues for hundreds of miles, with a new bridge over another river and more tunnels, until it reaches Asak Dzama, another higher sacred mountain, snow-covered in winter and with sharp crags in summer, in Othok County. The local population and neighbouring counties consider it a wrathful mountain and exercise extra caution and vigilance when crossing or approaching it. But now the Chinese are also destroying our sacred mountains, ruining the environment and completely undermining local traditional practices, aggressively assaulting Tibetan culture and beliefs, the source added.

The source says many fear that these widespread destruction and systematic constructions will continue in other counties and surrounding areas and regions, such as Lithang, Barthang, Markham, Tramo and Dzogang, all the way to other areas near the city of Chamdo, and eventually to the capital Lhasa.

Ven Dorjee said that “the developments in Tibet that China claims to have undertaken in the past have not been aimed at the Tibetan people and have never benefited us. Therefore, China's further development in Tibet, including the railway, will not benefit the Tibetan people, and you can clearly see that from the way they are built and the way the sites for the railway stations are chosen.”

Some Tibetans who have recently visited Chengdu and other Chinese cities are arguing that these projects are not intended to bring benefits to local Tibetans, but are primarily intended to transfer more Chinese population to Tibet, especially in the eastern Tibet, which clearly reveals how train terminals are built in cities and villages and how poorly they are constructed in terms of size, quality and facilities, and also failed to provide local residents with employment opportunities, training and coaching facilities, as well as the works being carried out without any form of coordination with the residents.

“The main objectives of the railway were, above all, to plan further large-scale mining operations in Tibet and to continue the resettlement of the Chinese population in ethnographic Tibet under various names such as supports and developments, an attempt to turn the whole of Tibet into a total Chinese colonisation,” he continued. “The Chinese invaders are again using the same bullying tactics as they did in the past, for example, they would say we will support you and the developments are for Tibet".

“As a result, the Chinese always think only about themselves, they have never thought and will never think about the people of Tibet. Tibetans in Tibet still live in tremendous poverty and they are not given fair and appropriate work opportunities, nor are they provided with any other professional training or services. If their claims about the developments across Tibet, including central and northeastern Tibet, meant truth or reality, there would be no need for the authorities in Beijing to ban foreign delegations, especially foreign journalists, from entering Tibet. Therefore, there is something for China to hide in Tibet and it must not be shown to the world,” he stressed.

According to the former political prisoner, the operations of China in Tibet are in effect exactly copying from the dark periods, such as the "century of humiliation" or " the four stages of colonisation". All these reasons, the railway, instead of benefiting Tibetans in Tibet, is basically leading to the destruction of the environment by major mining operations and further turning Tibet into China and Tibetans into Chinese, politically, ethically, linguistically and culturally.