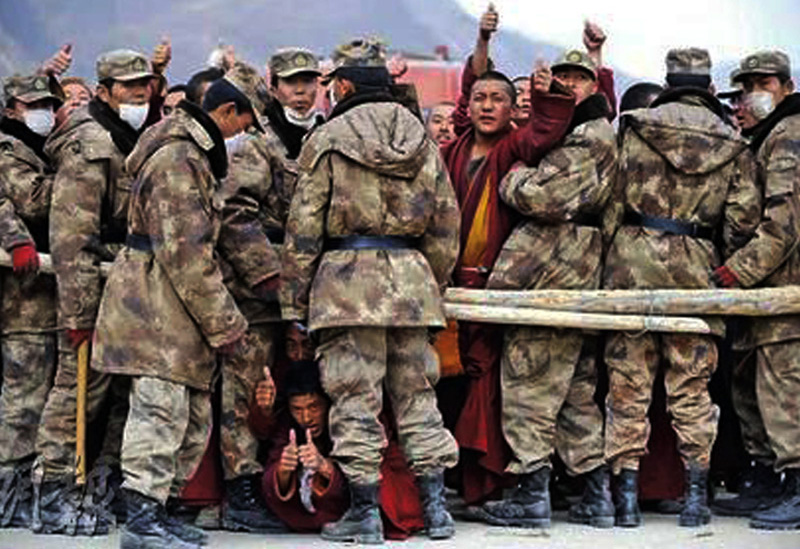 Dharamshala: A Chinese soldier said that if Chinese troops encounter a Tibetan independence activist in the quake area of Kyigudo, he or she could be shot dead on the spot without approval from higher authorities, The Epoch Times reports.

April 20 marked the seventh day - an important day to remember the dead according to Tibetan tradition - since a devastating earthquake hit Kyigudo (Chinese Yushu) in eastern Tibet, reportedly killing 2,064 and leaving thousands of victims homeless. The following day, official mourning ceremonies were held all across China and Tibet to express sympathy for the quake victims.

The state of affairs in the quake-affected area is intense. Due to their concerns over the rumors of His Holiness the Dalai Lama's visit to Kyigudo Quake zone, Chinese authorities are strictly monitoring the region. Tibetan people in Kyigudo are agitated with the large number of military soldiers from the Lanzhou Military District, who are entering the area to set up check points from Kyigudo Airport to the town of Jiehe and screening those who enter the region. To exacerbate the situation, snow and plummeting temperature hit the area this early morning, disturbing relief efforts and affecting victims living in tents.

Thousands of monks from the region and Tibet joined the rescue, but nearly 40,000 of them are being ordered back to their neighboring hometowns within two days.

The Epoch Times quoted a local Tibetan saying that soldiers and rescue teams were struggling with altitude sickness, while Tibetan-speaking monks did not have any problems and were playing an important role. Soldiers were reportedly staying on the sidelines while many monks were digging though rubble to search for survivors.

Tibetan spiritual leader, His Holiness the Dalai Lama, last week expressed his eagerness to visit Kyigudo to offer comfort and pray for the victims of the quake, but China continues to ignore his appeal.