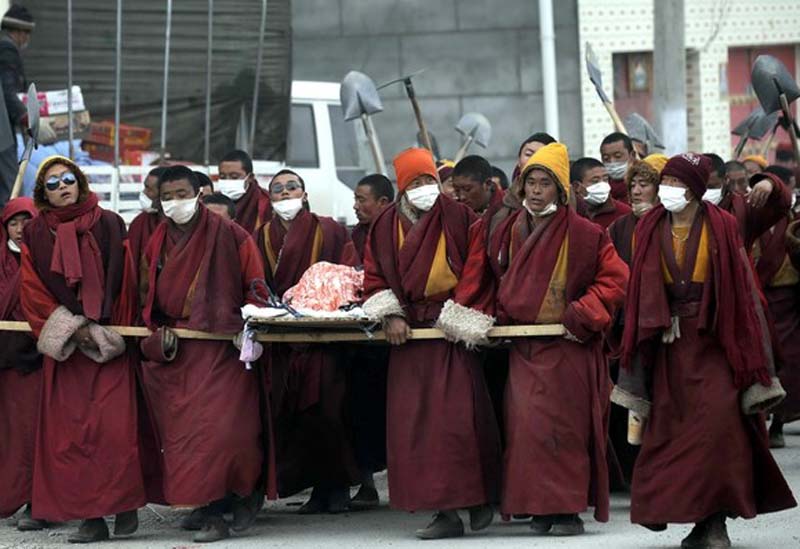 In a statement issued to the Associated Press, the State Council, China's Cabinet addressed in greater detail their reasons for asking the monks to depart. "Now it's the phase for epidemic prevention and reconstruction and [it] requires specialized personnel to start their work. It would bring more difficulties to disaster relief work if lots of unprofessional personnel were at the scene."

Despite what China's official reports say, many reports from within Tibet claimed that the monks' efforts were crucial to disaster relief in the immediate aftermath of the quake. Many monks traveled across hundreds of kilometers from their home monasteries in order to aid the relief efforts by preparing meals, excavating survivors from the rubble, and cremating hundreds of bodies. The monks also helped ease the spiritual anxiety that many survivors held on behalf of their deceased family members by chanting Tibetan prayers for the dead.

However, China says that the monks are no longer required to facilitate relief efforts.

"While fully recognizing the positive contributions of the monks that came from other areas, we suggested to them that they return to their monasteries to ensure the high effectiveness and order of quake relief work," said the Cabinet's official statement.

Some groups are not so happy with China's dismissal of the monks. "China's determination to colonize even Tibet's tragedy is depressingly all too unsurprising. Its expedient airbrushing of Tibetans' response to a very Tibetan tragedy underlies the importance of the international community acting to ensure that funding for the reconstruction effort is transparent and is aimed specifically at meeting the humanitarian needs of the Tibetan people. Rather than the political ends of the Chinese Communist Party," said Matt Whitticase, spokesperson for the Free Tibet organization.

Free Tibet also reported that Tsering Woeser, who is a Beijing based Tibetan writer, said her contacts in the quake zone told a different story about the monks' departure. According to them, local officials told monks that if they did not leave the quake region immediately, there would be trouble. "The government's attitude is that the lamas are an unstable element, this is especially so following the unrest," said Woeser, referring to 2008's widespread riots that occurred in the region to protest the Chinese occupation.

Monks were also noticeably absent in the Chinese government's media coverage of post-quake relief and the Day of Mourning ceremony that was held in memory of those lost in the disaster.