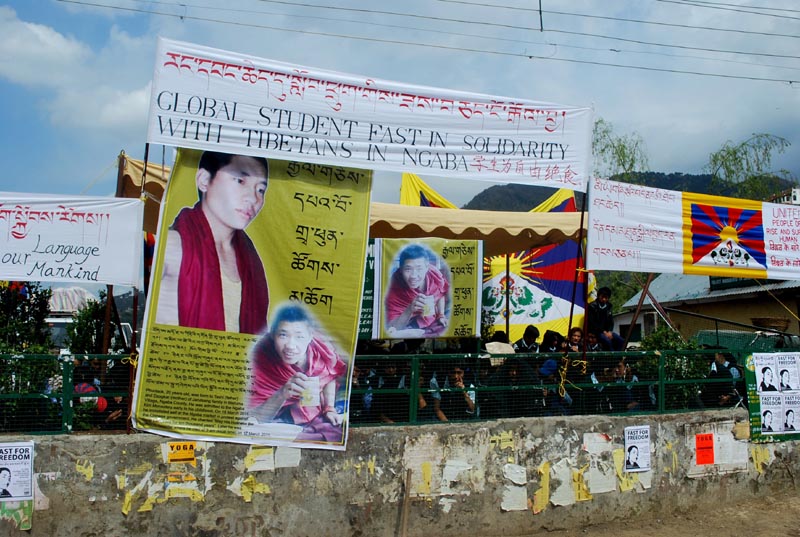 Dharamshala, India - A group of 139 Tibetan students from various schools in and around Dharamshala launched the ‘Fast for Freedom' Sunday, a one-day fast organized in solidarity with Tibetans in Ngaba, eastern Tibet (Ch: Aba Tibetan Autonomous Prefecture, Sichuan Province), the event was organised by the Students for A Free Tibet based in Dharamshala. Tibetan middle school students in Ngaba staged a hunger strike on March 17th, 2011 following the self-immolation of 20-year-old Phuntsok Jarutsang, a monk from Kirti Monastery.

Chinese armed forces have escalated their crackdown in Ngaba where a major second protest in recent weeks was reported on March 23th. 2011. "Today, I am fasting in solidarity with Tibetan students in Ngaba whose brave actions have inspired students and Tibetans worldwide, said Tsering Dorjee, a Tibetan student in Dharamshala. "I call on the international community and world governments to denounce the deteriorating human rights situation in Ngaba and to press Beijing to commit to a just and lasting solution for Tibet."

"Tibetans in Ngaba are risking everything to defy Chinese rule and to alert the world to the true suffering of the Tibetan people," said Tenzin Choeden, National Director of Students for a Free Tibet - India. "For a Buddhist monk to take his own life for the cause of his country illustrates the gravity and immediacy of the situation in Chinese-occupied Tibet," she added in reference to the self-immolation of Phuntsok Jarutsang on March 16th, 2011.

His actions marked the third anniversary of Chinese troops opening fire on a peaceful protest in Ngaba, killing at least 10 people. The 2008 protest was part of a Tibetan-wide uprising against China's illegal invasion and occupation - the largest demonstrations in Tibet since 1959.

Before lighting himself on fire, Phuntsok staged a solo protest in Ngaba town and was heard shouting slogans including: "May His Holiness the Dalai Lama lives for 10,000 years" and "Freedom for Tibet". Eyewitnesses reported seeing Chinese police kick and beat Phuntsok after they extinguished the flames. He died in hospital on March 17th, 2011.

This is the second self-immolation by a monk from Kirti monastery in recent years. In February 2009, Tapey, a monk in his mid-twenties set himself on fire in protest of the Chinese government's ban against monks participating in the Tibetan New Year prayer festival. Chinese police shot Tapey after he lit himself on fire. He survived but was later taken into police custody and his current whereabouts and condition are unknown.

Students across India and globally will participate in the ‘Fast for Freedom' on Monday, April 4th 2011, including at colleges in Pune, Delhi, Bangalore, Chennai, Kolkata, Manipal University - Mangalore, Baroda. The one-day action is organized by Students for a Free Tibet.